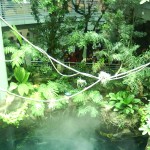 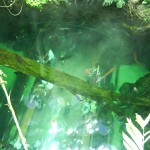 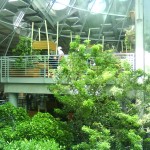 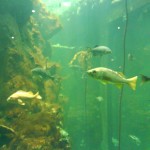 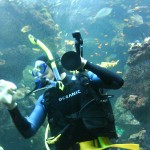 I worked for the California Academy of Sciences when I was a kid starting off taking classes at the Junior Academy then moving up to working at the Junior Academy and volunteering at the Steinhardt Aquarium and then working for the Morrison Planetarium. I used to get to walk around before anyone was let in and I could walk around behind the scenes and talk with people like Tom Tucker who worked at the aquarium who used to let me steal some of the brine shrimp from their huge tanks for my fish tanks at home to John McCosker the former head of the Aquarium who I kept begging for a real job for years. I used to run around this place like a sponge trying to soak up all that it had to offer. I knew every inch of the CAS from African Hall, Northern American Hall, that room with all the bird dioramas [what was that called again?] to the Hall of Minerals and Wattis Hall of Man. They they closed it all down. Tore down most of it and rebuilt it. I was amazed at all the work that went into it and how they had focused on making things as green as possible. I looked forward to opening day, but me being a bit of a “sunset redneck” as it were didn’t get out there on opening day.

I was glad. When my wife and daughter and I get a chance to go we waited in line for about 45 minutes just to purchase a membership. Now when I was a kid [get ready for the “back in my day…” line] It cost about $25 a year for a family membership. Five years ago when my wife and I took up a membership again it was $45. Today due to inflation the price for a family membership is $159. No, I kid you not. If you’re a single person it’s $25 to get in vs. the $6 when I was in my late teens. Is it worth it? HELL YES! We take our daughter a couple of times a month and my wife goes with her even more often. At first it doesn’t feel like there’s much there because it’s more of a big room than several smaller rooms, but there is a lot going on there. My best advice is that if you live in SF then you should take a day off of work and go mid week. On the weekends it’s way too crowded and you’ll be tripping over strollers left and right. I did find the “food court” rather refreshing from the old days when Duchess Services handled the food and it was cheap greasy fries and tasteless hamburgers and hotdogs. Salads back then were considered to be iceberg lettuce with a wedge of tomato and a slice of cucumber drowned in cheap over the counter Italian dressing. Now everything and I mean everything is organic. Want a Coke? Nope. Even the sodas are organic and they have a range of foods that runs the gamut of the cultures of San Francisco. They also have a rather upscale dining room downstairs called the Moss Room that features very upscale foodie stuffs from the likes of Charles Phan of Dragonfly and Straits, but is overseen by head chef Justin Simoneaux. I haven’t eaten there yet, but when I can find a way to google up a few extra hundred bucks I’m taking the wife there to live it up large. If for no other reason than to see the moss covered wall.