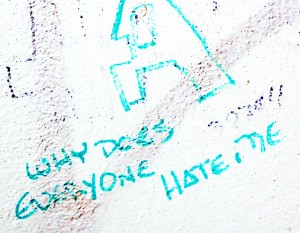 This question came to mind today as I was looking over SFGate’s website reading the morning news. Every article has a comment section and anything that’s about something going on in San Francisco has lots of people who aren’t in San Francisco, let alone California ranting about how much we suck. I found an article on SFist from a non-resident who lives in a city where everything resembles a strip mall that driving from one town to another gives you no idea that you’re in a different city, but apparently he at least had come here once who said the following:

1. NO LEFT TURNS
2. The lack of parking
3. The plentiful supply of homeless people
4. Hills, hills, hills–good for views, bad for safety
5. Frequent events/protests/parades/festivals that snarl up traffic for no good reason whatsoever
6. The atrociously cold weather
7. The nutball politicians who run the joint
8. The crappy public transportation system, which only seems functional in comparison to the even worse nightmares in other cities. Being the smartest retard ain’t something to be proud of.
9. Every miserable night on the town I’ve ever spent in SF, which seem to devolve into a Sisyphean quest to find “the” right bar or nightclub
10. The  smug, self-satisfied attitude of residents who are convinced that they live the greatest city in the world. It’s the people who claim to love the environment, then commute to jobs in San Jose that really burn me up.

Perhaps you should try driving somewhere other than downtown. Mainly Market and Mission streets downtown are the only place I see this in a rampant enough form to make this kind of comment. I personally get a chuckle when I see a sign that says, “U turn OK”. Gee, thanks for the complement. I never considered my turning abilities worthy of a sign.

2. The lack of parking

Again, go somewhere other than downtown which has plenty of parking if you don’t mind paying for it. When I used to live in the Mission district I hated that I had to park a block away from my house, but I also lived on a tiny private street that there wasn’t enough room to turn into the garage. Otherwise, I don’t have a problem. When I go downtown I rarely drive, but take Muni, see below for more on that one!

3. The plentiful supply of homeless people

OK, got me there, but then again I’ve seen lots of homeless people in every metropolitan city I’ve been too so that’s not just a problem for us.

This one I thought was funny. I can’t figure out one reason why they’re bad for safety unless you don’t know how to put on your parking break or are the verge of a coronary collapse. We have lots of hills out in the Sunset and I see elder Asian men and women then walking up and down them without breaking a sweat or getting winded. I’m sure they consider it good exercise, which it is.

5. Frequent events/protests/parades/festivals that snarl up traffic for no good reason whatsoever

Again, downtown and they aren’t really that frequent. I haven’t seen a traffic blocking parade in ages. We have maybe one day a month and if you’re going to one of these, take MUNI!

I’m sorry, you must be talking about Chicago, Illinois, Buffalo, New York or any city up in the northern regions of the US. It’s been quite a few years since I’ve seen the temperature drop below 40°. Maybe you were born in Hawaii where I hear they pass out from the chill of opening up the refrigerator.

7. The nutball politicians who run the joint

Chris Daly is gone thank you. If you look at the current Board of Supervisors they’re a lot more moderate than they used to be, but seeing as you didn’t name any names you’re just coming forth with an opinionated generalization. On the other hand, I can’t name one politician from Silicon Valley except Carly Fiorina and Meg Whitman who dumped tons of money to win an election that they lost, not to mention that they’re former CEO’s and not politicians. Now I personally would have liked to see Emperor Norton on the Board of Supervisors, but then I’d be dead by now.

8. The crappy public transportation system, which only seems functional in comparison to the even worse nightmares in other cities. Being the smartest retard ain’t something to be proud of.

OK, wait a sec, you’re a Silicon Valley person who has VTA and you’re telling us that Muni sucks? Last time I was down in SV I rarely saw public transportation anywhere. When I was working over by multimedia gulch it took me about 30-40 relaxing minutes on the local transit system. It took me close to an hour last time I tried driving down there and I know the fastest way to get around the city.

9. Every miserable night on the town I’ve ever spent in SF, which seem to devolve into a Sisyphean quest to find “the” right bar or nightclub

Ah, there we go. He’s a hipster, possibly from the neo-bridge and tunnel crowd which is now the Silicon “I’ve got this great start up that’s going to make millions when google buys us!” Valley crowd with the $500 distressed Diesel jeans and t-shirts with band names that broke up before they were born. These are the anathema to nightclubs because once they find the right club it’s no longer a cool place to go to and everyone who brings in the money to the clubs stops coming and they have to close down. If you’re from here or at least been here for 10 years you know where the good bars and clubs are. IF you’re in SV and have to come up here for a nightclub or bar then that probably means you don’t have much in SV. My favorite is a small, invite only with a killer sound system and fully stocked bar with no cover charge. It’s called my home and it’s up on a hill with a lovely panoramic view of the ocean from Fort Funston all the way north to the Marin Headlands. The view takes people’s breath away and then the single malt scotch kicks in.

10. The smug, self-satisfied attitude of residents who are convinced that they live the greatest city in the world. It’s the people who claim to love the environment, then commute to jobs in San Jose that really burn me up.

Oh no, you did NOT use the “S” word on us now did you? I rather like being self-satisfied. It means I’ve accomplished something for and by myself. I didn’t need a hand out from someone else to be happy or a pill prescribed by a doctor. I also refuse to commute to San Jose for a job and except for a short 3 month stint in Burlingame [which I hated] I have always worked in San Francisco. If you’re leaving San Francisco during rush hour to go to work you are driving against the commute. More people come here for jobs instead of leave here to work somewhere else. San Francisco is a small city too. It’s 7×7 miles. I know people in lots of other cities who have to drive 30 miles to work in the same city. If I had to drive 20 miles to get to work I’d be in El Cerrito or Palo Alto.

So there is my rebuttal rant. My grandmother had an old saying that was, “If you keep your own doorstep swept, you won’t have time to sweep anyone else’s.” I think that people outside of San Francisco and California even are living in such sucky lives that they have to verbally attack us because they envy us. If people who live here don’t like it, they leave to find a better place to live. Honestly, if y’all think San Francisco sucks so much, don’t tell us because we don’t really care. We’re trying to fix the things we as citizens of this fine city where the United Nations was started think is wrong with it. Perhaps it’s time for you the people outside San Francisco and California who don’t like us to start looking around at the problems you have in your own city. That would give you something more productive to do that might actually bring about some results for you.

Just to finish this off, as I was reading the newspaper this morning I came across an article on Sela Ward, the actress who is from Meriden, Mississippi. This small town named a street after her and one of the residents who was against it reason was, “Well what if she gets all cracked up on drugs out in California? Then what are we going to do with street named after her?”

Yes, we are all drug addict hippies that are so dumb that we have also just killed the “Republican brand” according to the Institute of Governmental Studies, but they’re just lefty pinko commies from Berkeley right?