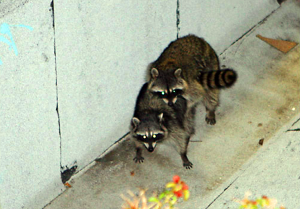 Well I suspect the title alone will cause all the freaky people who sit up late at night in the dark doing google web searches to come to this site, but after last night I feel I should write something.

While San Francisco is a major metropolitan city it doesn’t mean we don’t have wildlife other than rats and mice. You can find raccoons, skunks, possums and even coyotes within San Francisco. Luckily, I have yet to run into a coyote in my backyard, but raccoons are pretty common in the backyards as they’re a lot more agile. I did notice a skunk once when I went outside to throw some food on the grill thinking, “that’s an odd looking cat” and getting a closer look at the white stripe up its back I walked backwards very slowly until the skunk decided to check out the next yard.

Now raccoons tend to be on the rather friendly side. Either that or they aren’t afraid of people one bit. We used to have an old raccoon that lived in a tree in our backyard. He was blind in one eye and covered in mange and couldn’t compete at night with the others so he’d come out during the day. He was slow and probably had a lot of arthritis so we took pity on him as he would come up to the Indian grinding stones my Mother had in our backyard for water. One day I went outside with an egg and sat on the steps a few feet away and with his one good eye he saw I was holding out something that looked like food. He walked over to me and sheepishly took the egg from my hand and walked over, cracked it on the rock ate the insides and then washed it down with water [raccoons don’t have salivary glands like the rest of us, so they need lots of water to eat]. This continued for a few months until my new little pet would come up and actually sit by me while he ate and let me give him a good look over. He had fleas and ticks real bad. That was obvious and I would be checked every night after feeding him to make sure I hadn’t picked up any ticks.

While being stripped down to your underwear and checked for ticks every night was kind of humiliating, how cool was it to have a pet raccoon that would come up for dinner every night? He started slowing down and his condition came up when we took our dog to the vet one day and our vet had seen an article in the newspaper about our “little friend”. When I told the vet about his condition he mentioned that it would probably be best to have the raccoon put down because it was suffering. We called animal care and control one day when my “pet” was sleeping for what seemed like three hours in our back yard. They came out expecting him to have left, but there he was sleeping on the ground and they just picked him up and put him in a cage and took him away to be put to sleep in a nice warm comfy room. At least it was more warm and comfy than the outdoors in the Sunset district.

So where does the raccoon sex [warning audio not for the faint of heart] come in? Old raccoons are nothing like younger raccoons. They are all over the city even down in the financial district. They’re just very adept at hiding. I usually see them at dusk or after dark. Well, last night I was woken up to a sound I hadn’t heard in a few years. If I had been more awake I would have run for my microphone and recorded the sound because I would have made millions using the sound in a horror movie. There were a couple of raccoons on our back deck having sex.

Raccoon sex is nothing like a human porn movie or even human sexual relations. It sounds more like gladiatorial combat, only with more scratching and hissing. The only thing more horrifying is raccoons fighting. These nice fuzzy creatures aren’t so nice when it comes to sex. It’s worse than the sound of a cat fight and there are no quotes because I’m referring to actually cats, not drunk women at a bar. It’s also something that is extremely loud probably reaching close to the 100db range, but I didn’t have a meter to test the truth in that, but trust me, it was LOUD AND ANGRY. [raccoon sex audio]

Luckily, it only lasts a couple of minutes [no snickering now!] and then they go off along their merry ways. I suppose this was caused by our current warm weather that turned this pair into a couple of cats on a hot tin roof. Now I bet some of you will ask me, how I knew they were having sex and not fighting. I will only say this…

I know of raccoon sex, but of this I can speak no further.