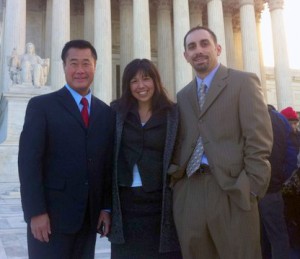 Apologies in advance for all of the quotes below, but I had an interesting event happen to me two nights ago that I wanted to wait a bit on before saying anything. I was just sitting at my computer checking twitter every so often and noticed that @JenniferFearing who works for the United States Humane Society sent the following tweet:

Now those of you who are regular readers of my site know I’m completely against shark finning so I re-tweeted the post with a hash tag of #lelandyee because he was opposed to AB376 because it would take away an ancient Chinese tradition [you know, like foot binding]. While I’m not that into politics I am into doing what I believe is right.
She then replied to my tweet with:

To which I replied:

And then the fun started to begin. More people started to get involved like Bill Wong:

and Jennifer Fearing shot back with:

Which lead to Adam Keigwin, who is Leland Yee’s Chief of Staff to jump in with:

Gee, I didn’t know I was a lobbyist and tweeted back that I was just a concerned citizen against the barbaric process of shark finning and preceded to get a number of message back from @akiegwin that seemed to be getting more irate as time went on. He knew I wasn’t a lobbyist and after the other’s stopped posting replies and it was only me I got the following from him:

Ouch, I think I hit a bit of a raw nerve there and those of you who have read my articles in the past know that I cited very credible sources for my information on shark finning and how when further analyzed the shark fins being sold in Chinatown where shown to be coming from endangered sharks as well as commercially legit sharks. Then something funny happened around 9pm. All of @akiegwin’s tweets about this to me disappeared from Twitter.
You can delete something you’ve tweeted with twitter, but apparently while the website and apps such as tweetdeck will eliminate them the twitter app for the iPhone doesn’t. So somewhere down the line Mr. Kiegwin received a phone call telling him to pull his tweets immediately. Apparently in checking out Twitter there were quite a few people who joined in on the discussion, but just didn’t include me and I suppose Senator Leland Yee doesn’t want any more bad publicity because in politics the concept of any news is good news doesn’t hold up.
I used to like Leland Yee and the fact that he could usually be found at the Tennesse Grill frequently, but when he came out in outrage over the supposed destruction of ancient Chinese culture by banning the sale of shark fins I realized that our next mayor has to be a mayor that serves the people, not just Chinese people. Granted, the largest race of people in San Francisco are Chinese, but everyone must be served equally.
I also learned something that can be more important. Smartphones have GPS tracking built in and unless you turn it off then the location from where you send a tweet from will be given out to the world. So if you’re going to piss someone off you might not want post your location if you’re doing it from home. Now I’ve got to go. My doorbell just rang.