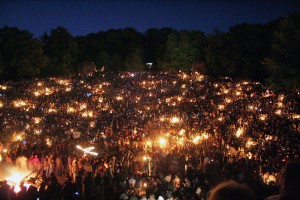 Many of you are not aware of today’s festival so I will share it with you. The night before May Day was the evening of a sacred festival often portrayed as coming from the old country which usually means the under civilized parts of eastern Europe long ago, but is usually to celebrate the darkness before the light of spring.

Walt Disney took it upon himself to create a bit of a spin by associating Walpurgisnacht [also known as Hexennacht] with halloween to create a night where Satan runs amok and parties with those above ground in his symphonic masterpiece Fantasia. Walt even put a soundtrack to this evening by using Night on Bald Mountain by Modest Moussorsky to help emotionally build upon the notion of how evil tonight is supposed to be. Walt is to Walpurgisnacht as Cecil B. DeMille is to the Old Testament. More people know the story of Moses as Cecil made it than who have read about it in the bible. Of course Walt had to end it with Ave Maria so keep from turning all the kids watching into evil incarnate, but I digress. Another fun fact was that Moussorsky wrote Night on Bald Mountain originally as a celebration of the Summer Solstice.

While I don’t have definitive proof I’m fairly certain Anton LaVey was influenced by the last segment of Fantasia and it’s imagery to claim today as the starting date for his Church of Satan in 1965. So maybe even old Anton was more influenced by Walt Disney than the true folk festival that tonight is where the locals would celebrate until sun up for the first day of May so they could work off their hangovers by participating in fertility rites that they probably had done the night before, where I doubt Satan was in attendance.

The festival was accompanied by night time bonfires. If you’d like to participate I suggest you light a few torches after dark [I personally recommend Home Depot’s] and look out into the night sky and realize that tomorrow is the awakening of spring and better days are ahead.

One Reply to “Fröliche Walpurgisnacht!”