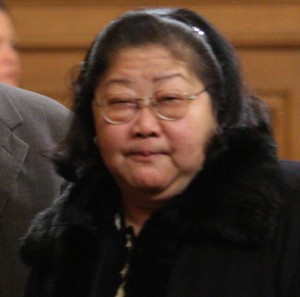 Rose Pak, the power house iron Queen of Chinese politics in San Francisco has had a few things to say about our State Senator and Mayoral candidate Leland Yee today.

Ms. Pak being the head of the Chinese Chamber of Congress has never held a political office, but her voice carries weight even though she herself has a bit of a colorful past. If you are Chinese, she is THE force to be reckoned  with. I mention Chinese because she doesn’t really focus on much else.  She has stated that her goal is to put more Chinese into political power and works on bringing more Chinese to the San Francisco Bay Area. She is the voice of the Chinese, but unfortunately, being a political power she is not the voice of the people. As you well know, I want our next mayor to ignore color and race and speak for all the people of San Francisco, not one group that is fastly  growing to be the largest majority in the San Francisco Bay Area.

She voices concerns over Senator Leland Yee who also speaks for the Chinese people of the San Francisco Bay Area as well as the state. This is kind of a who do you cheer for fight in my book. Ms. Pak is behind the Run Ed Run campaign to get Mayor Ed Lee to join in the campaign [I like Mayor Lee by the way and think he’s been doing a pretty good job] and she isn’t a politician so I’m going to have to give a nod to her.

I have spent a lot of time in Chinatown and it does indeed need help. Someone like Rose Pak has done a huge amount to help out the Chinese who live there. Rose, hats off to you. Now what exactly is her problem with Senator Yee?…and I quote:

Leland Yee is one of the most morally corrupt politicians I’ve ever encountered in 40 years. From the first day he stepped in as the school board member, lying to get his children to the preferred assigned school using a phony address, selling his services to Chinese-American parents who would cut an arm or leg to get their kid to the right schools … he did all of that.

So I don’t think he stood for anything decent in our community except to come and take money and then claiming to be the first Asian this and Asian that, but he doesn’t impress me. He doesn’t stand for anything except corruption and bribery.

OUCH! She has been quoted that if politics are a blood sport then she is going to play them as a blood sport. That sounds more like a decapitation than a first blood blow. I do have to agree with her. If I remember correctly a long, long time ago a man named Gordon Lau came and talked to my High School class. He was the first Chinese politician in San Francisco and he got some serious heat.

I have never paid much attention to what Ms. Pak has had to say, but now I think I will turn an ear towards her. I might get my face slapped for what I just wrote, but if it comes from Rose Pak I think it will be an honor. Just as long as any swearing is in Cantonese since I don’t understand swearing in Mandarin.