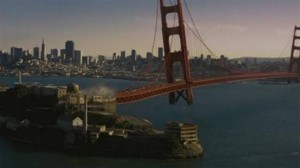 Being an lover of  sci-fi and horror movies I’ve noted a trend when the movies are set in San Francisco…The Golden Gate Bridge always goes first. The X-men did it, Terminator did it, It came from the deep did it and now the bridge is attacked by those damn, dirty apes! [Rise of the Planet of the Apes reference.]

Perhaps part of the bridge always being destroyed has to do with appeasing people outside of the city who hate us for our San Francisco Values. I’m not sure, but I think it’s always kind of funny. I have rarely had reason to drive across the bridge as I’ve lost contact with most of my old friends in the Marin area and I don’t really have any business contacts in that direction, but I do generally like Marin and especially Sausalito. I have in past five years actually walked across the bridge for the first time in my life which I have to say is a rather invigorating, but pleasant walk to take.

Well, now this has changed. Tomorrow I will start some freelance work across the bridge in Mill Valley. This could, after awhile turn into a permanent position. Now I think I have to understand the method of thinking involved in having to cross a bridge to go to work. I had previously vowed never to do this, but the company that wants me is just so cool that I couldn’t resist it. Hopefully, I won’t encounter any crazed monkeys tomorrow.