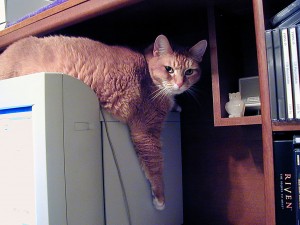 Yesterday was probably one  of hardest days for me. While I grew up having dogs and being around pets I never had to put one to sleep. My mom had asked me once with one of our dogs if I would go and be with him when he was put to sleep, but I couldn’t do it. I always felt like I was being the executioner. Well, yesterday the time had come for the woman I had spent the last 19 years with to go to sleep for good. It was time to take the long walk with Morgana.

I could tell the last couple of days were hard for her as her meow changed to a yowl that sounded like she was in pain and we noticed that she couldn’t walk very well. This was hard to take because she had always been a feisty cat in her youth that would jump off our deck in the mission [that was 10′ high] and hit the ground rolling with a bird in her mouth. She survived a couple of raccoon attacks with almost no scratches and she even was shot with a BB gun that didn’t seem to phase her until I happened to notice it when she was on my lap one day. My friend Mike gave her to me to replace Max who had adopted me just by walking in my house one day and curling up in my lap. Max left me when I was away on a trip to London in the days before laptops and email or text messaging so I was a little shocked when I came home, but it was much easier to deal with. Morgana’s mom was an Abyssinian who happened to get loss the first time she went into heat and met up with a rakish tabby and got their freak on. She started life with big Abyssinian ears like her mom and she was the last one of the litter to go. I think I did pretty good with her. She only started to slow down in the last six months.

The two worst parts where having to make the phone call and having to take the long walk to the vet. I really hurt inside feeling like I was escorting a friend to the gas chamber. I managed to hold it together long enough and I have to give big kudos’ to my friend Dr. Scott Anderson of Avenues Pet Hospital. I’ve known him since I was a little kid and he and his staff have always taken excellent care of our pets.

Seeing as this was the first time I had to do this I wasn’t aware of the options. I didn’t realize it only took 12 seconds, but I did know that you could be there if you wanted to. I couldn’t do that. That would have been too hard for me. I was offered the choice to see her after, but I didn’t want that either. I was even offered the choice to bring her home after and bury her in my back yard which I couldn’t do because that just seemed gross to me. In the end she will be cremated and I’ll get the ashes to put somewhere appropriate.

She was a great cat that got a good long life. I’ll miss her, but I know she won’t be in pain anymore.