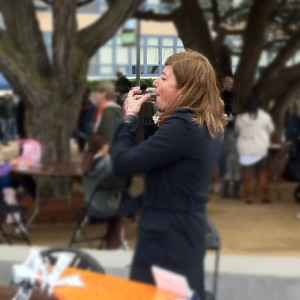 I got to go to the local Sunset Community Festival on Saturday which was actually called the Playland at the Beach Festival as well even though there was only a single sign up with info on the long defunct Playland. I have to admit that it was one of the better local gatherings I’ve seen. This is probably due to the fact that it was at the newly renovated West Sunset Playground which as I expected in the previous article on it, the mulch was being trashed by kids everywhere.

Because this is a community focused event that pulls political powers from around the city there were booths for just about every person running for Mayor of San Francisco. I got to meet with John Avalos [of course], Joanna Rees and Mayor Ed Lee, who I must say is much taller than he looks in pictures. Phil Ting was there, but had no booth and ran off shortly after I arrived. I was especially surprised to see that Carmen Chu, Fiona Ma and Leland Yee who tend to be all over the Sunset district had unmanned tables and were no shows. I would have liked to have a chance to bend Carmen’s ear for a few minutes to an hour to let her know what needed some attention in the Sunset District. Tony Hall has several older, conservative cronies out to push him as well, but he too was a no show which was odd considering his connection to the Sunset District. All in all I was surprised to hear John Avalos’ name mentioned by many of the people there. I think he may have a real shot at getting it since he’s staying away from the political infighting going on with other candidates for Mayor.

The day wasn’t all about politics though and I was glad to run into Tom Prete of Ocean Beach Bulletin and Woody LaBounty of the Western Neighborhoods group who had booths as well. I’ve included lots of pictures which you’ll see at the end in the slideshow and it was a fun, but crowded day. I do have to admit that the only downside I saw at the event was Bank of America’s booth that was handing out free stuff for spinning a wheel which had people lined up blocking the comcast and Run Ed Run booth so you couldn’t even get close since people wanted to win a frizbee, caramel corn or a few other things [like I said, they were lined up thick and I couldn’t really see.

The games arcade for the kids was packed to the gills with kids flying around in the multi-tiered bouncy houses they provided and there was also a flea market sort of set up near by where you could get anything from vintage vinyl to clothes to well, garage sale junk people wanted to get rid of. I was pleased to meet Pat and Virginia of the local NERT group that I’ll be writing about soon. If you need to know what to do in an emergency, NERT will teach you in 6 short, free classes. Other Avenues, the health food store that I’ve written about previously was there and I had to introduce myself so they had a face to put with the article I wrote.

There was also food from local places such as North Beach Pizza and oddly enough there was one booth selling deep fried oreo’s. I wanted to give it a shot, but I didn’t have any cash on me and apparently some of these booths haven’t heard of square that I’ve talked about before to allow them to take credit cards cheap.

For a community get together this was one that was done right. I was surprised that all I had to do for many of the booths there was mention  Baghdad By The Bay and they knew who I was immediately. I plan on visiting more of these local events in the future.