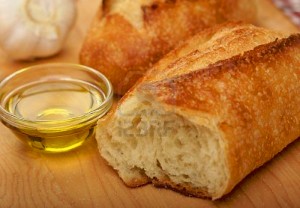 While sourdough bread is thought to have originated in Ancient Egypt, it’s claim to fame has become it’s association with San Francisco gold miners [the other 49er’s]. I think I was probably around 12 or so before I tasted a French bread that wasn’t made with sourdough. My family used it for everything.

Their brand of choice was the now defunct Larabaru bakery’s brand. The company is so defunct that you won’t even find their name turning up results in Google. I remember the first night I had French bread that wasn’t sourdough. It was at the SF Zoo on a member’s night back when non-profits really gave back to their members if only but once a year. They offered everyone who came chili with a french roll and butter. When I bit into the roll it didn’t have the sour taste and something changed in me. I realized how much I hated sourdough bread.

Yes, I have to admit that while be a born and raised San Franciscan who is living in the same house I grew up in, I hate sourdough bread. There are people who used to come to the  city just for the sourdough bread. They even had stands at the airport where you could buy it to take home with you. When there was any major event between competing cities the Mayor of San Francisco would always send sourdough bread and crab to competing city’s Mayor [ahem, not organic hot dogs, please take note Mayor Ed Lee].

Now for the few of you who don’t know what sourdough bread is, it’s basically bread made from old dough. In particular the dough has offered itself as a home for the bacteria Lactobacillus sanfranciscensis. Yes, it may have started with the Egyptians, but when someone found out what was making it sour it was named after San Francisco. Thanks, I think.

In order to continue to make sourdough bread you have to keep a little bit of the raw dough behind to make your next batch. This mother as they call it is the starter that every bakery has their own version of which dates back to opening of the bakery. I won’t go into all the chemistry of this because it will bore you to tears, but if you really interested you can check it out on Wikipedia.

I do still eat it every once in awhile though and it makes a particularly good combination with San Francisco’s clam chowder from Boudin Bakery. I might add that it is the only bakery I will purchase sourdough bread from. They started in San Francisco in 1849 and are still here. That something to say about a San Francisco company that old.