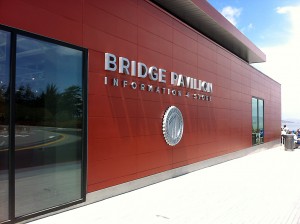 Today was the official opening day of the new plaza for the Golden Gate Bridge falling in line with it’s 75th anniversary being this Sunday, May 27th. So I had to take a trip out and see it for myself.

WOW, it’s actually a pretty nice place. It reminded me a bit of Lands End Lookout, a lot actually. Which is probably because after talking with one of the nice gentlemen who worked there who told me all about the bridge like I was a tourist I found out that apparently that’s the way the Parks Conservancy does things. Pretty much same shape just a bit bigger, but still nice to walk around in. Not as much information or displays regarding the bridge inside, but lots of books and DVD’s you can purchase to learn more.

The real place to learn about the bridge is by walking around outside the pavilion. That is where you’ll find lots of open air exhibits about the building of the bridge. The cafe that is across from the cafe is definitely set up to fuel people talking a walk across the bridge. I wish I had known that on my first trip across the bridge, but at least I know enough now if I decide to do it a second time.

The Golden Gate Bridge Roundhouse which used to be a restaurant for traveling motorists has changed now to be a place where you can book tours or if you’re feeling brave have a picture of yourself taken against a green screen that will make you look like you’re walking up the bridges cables or you can have a family shot as if you’re standing on top all for the low price of $20. Of course now that I’ve written this article I can’t do it because I would have liked to have told people I knew someone on the inside who let me take a walk up the cables.

For those of you who aren’t in the best shape it’s not so bad a trip. Not too much walking and the what I believe are newly installed bike lanes look pretty good. A note to those of you who don’t like bikers, these lanes are separate from the pedestrian walking areas and it’s pretty obvious.

If you want to make a breath taking outing some day you should do both the Golden Gate Bridge Pavilion and  the Lands End Lookout because you’ll have to drive along Lincoln Boulevard. Not the Lincoln Boulevard that runs next to the park, but the one that runs through the Presidio. You will get views that you just can’t see anywhere else. I’ve made another little gallery of the pictures I took for you. Enjoy!