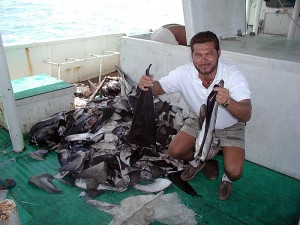 Today is the day all the animal welfare people have been waiting for and the Chinese traditionalists have loathed. As of today it is officially illegal to engage in the trade of shark fins within California.

Specifically this will hit Los Angeles and San Francisco the hardest so I’ll focus on San Francisco because I suppose we hear about it more here.

Shark fin soup is considered a delicacy by the Chinese and served to celebrate births, weddings, nowadays pretty much any celebration comes with shark fin soup, or at least it did until AB 376 was passed. This caused quite a brou-ha-ha within the Chinese community with cries of racism being throw around like the shark fins themselves. While being seen as an attack specifically against the Chinese which is actually more collateral damage since the Chinese are the only ones who eat it, it was more about saving the wildlife of our oceans, mainly the top of the food chain predators of the ocean — sharks.

AB 376 was passed because there was a huge amount of sharks, including endangered species of sharks being harvested to make the delicacy with no taste. In some cases there has been a 90% reduction in the population of sharks who’s fins and only fins are used for the soup. No other dish uses shark fins and the less economically feasible rest of the shark is worthless in comparison and is thrown back in the ocean allowing the finless shark to die.

If you’ve read my articles on the subject before you’ll noticed that I was called a racist by Senator Leland Yee’s twitter account along with several other lovers of shark fin soup who tweeted to me questions such as, what about sharkskin suits? They use shark [No they don’t. Sharkskin is a smooth worsted fabric with a soft texture and a two-toned woven appearance. No sharks are harmed in the making of a sharkskin suit]. Shark meat that was said to be sold at Costco and other food outlets was shown not be sold any longer and it’s next to impossible to find shark meat for sale anymore.

Because of the ban going into affect today there has been a few more articles on the subject noting that the stores and restaurants who still have stock on hand were trying to unload it before today with everything from a Father’s Day 20% discount to $999/lb to discounted shark fin soup with a whole chicken for $138.

In one article I did find information on why this delicacy with no taste because popular. It dates back to ancient China when killing a shark took some major cojones or however one says cojones in Mandarin or Cantonese. To show off your masculine prowess by killing a shark meant you had to get your hands dirty and risk your life. So after risking your life you have to show off to guests by making them eat it. Makes me think of something along the lines of, I had to work hard for this food so you’re going to eat it. Kind of like something your parents would say to you when you were a kid, but in this case you were celebrating the prowess of the shark killer by consuming the flesh of the animal that would have consumed the flesh of your host. Now I’m thinking of some of the hunters I know and that works out pretty similar.

There’s a difference here you have to take into account. It doesn’t take any physical prowess to ask, how much is that shark fin in the window? The whole ceremony behind eating shark fin soup has been lost today and in some ways that’s a shame. I’d like to see how much a person really wants a cornerstone of their culture if someone hands them a knife and points to the ocean and says, help yourself.

I have to admit that I am no vegetarian and a far cry from it, but when I was a Boy Scout and handed a live rabbit and tossed into the woods over night the rabbit got to run free and I was a vegetarian for the night. It might have been different had I been stranded for more than a couple of weeks, but I could go a night without meat. Most of us that were raised in cities don’t have the hunter instinct anymore so the idea of you’ve got to kill it before you grill it is lost on us. I can understand the original reasons why it became a delicacy and that also helps explain why someone would want to eat something that’s tasteless. It’s not about what it tasted like, but how you got it and that part has been lost in today’s Westernized culture.

On the other hand, here’s a knife, there’s ocean. Have at it.