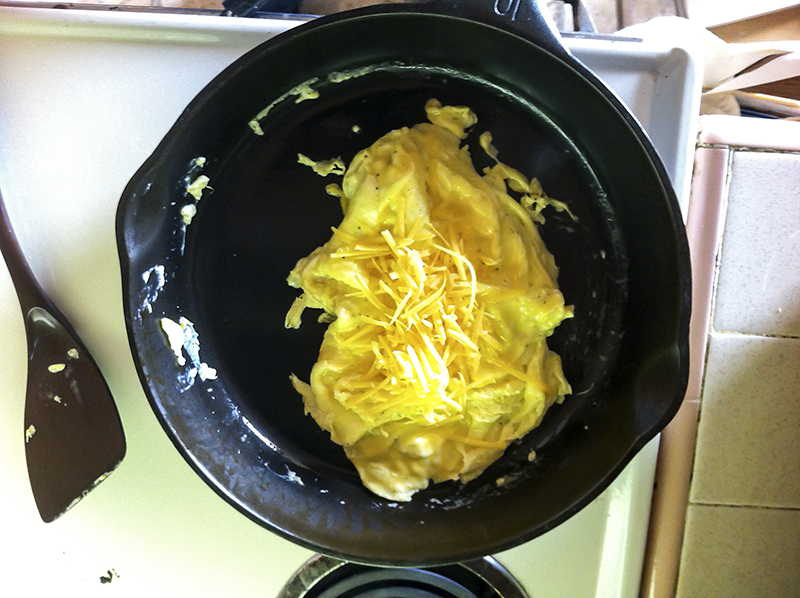 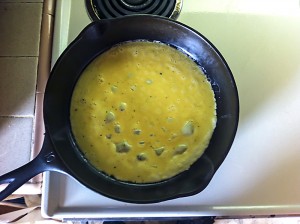 A few of you might remember my article from back in April about me finding my Great-Grandmother’s cast iron pan that I reconditioned and brought back to life. Well, finally I got around to using it and here’s what happened.

Just to bring you all back up to speed. I’ve never used cast iron cookware before other than in the Boy Scouts which, well that was never really cooking, but more tossing meat on heated metal until it was safe to eat. We never took proper care of the pans because they were cast iron. In actuality we treated them a lot worse than you’re supposed to, but because they’re cast iron they held up. Since getting married, Wife and I have had non-stick pots and pans. Wife doesn’t really like non-stick and I didn’t really know any better. Luckily Wife didn’t like the idea of me cooking in pan that was made back in 1903 [maybe she though it would turn us into zombies or something] so I got the pan and the kitchen all to myself.

The pan, because it’s really old has a certain quality to it. If you go to a store and rub your fingers over the bottom of a cast iron pan it’s a little rough. This one because of the way they used to make them was smooth and I mean silky smooth. I had re-seasoned the pan and had it all ready to use. Turned the heat on medium and let it warm up with a beat 3 eggs with a couple of teaspoons of water [this is called French eggs I was told by a friend of mine]. I tossed a bit of butter in the pan and swirled it around before tossing the eggs in and once I added the eggs the magic happened. 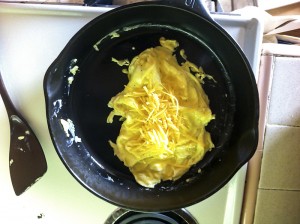 Non-stick pans become, well, sticky after awhile and the true test is whether or not you can cook a liquified high protein material like eggs without it sticking. Cheese is another good one, but I like to eat eggs more than a fried handful of cheese. Our scrambled eggs from a non-stick pan always looked awful. They bound together in clumps and were nothing like the omelets I used to be able to toss out when Wife and I were first married. Well I quickly noticed a difference.

The eggs didn’t stick at all. As a matter of fact I would have had to work hard to break them up as after a minute I noticed the eggs had set and were actually cooking a bit too quickly. Next time I’m going to try a medium low heat. I tried to break the egg mass up, but it stayed together so I tossed a handful of cheese in the center to add more difficulty to the test. The edges flipped over nicely and effortlessly to give me in the end an omelet when I was just trying to make scrambled eggs.

The taste? Awesome. Wife and I liked to go out for breakfast and I have to say that these were better than what we got when we went out, easier to make than the scrambled glop and the clean up was pretty easy as well. 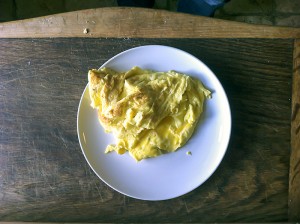 After all the omelet had left the pan I let it sit while I ate. I came back and the pan had cooled a bit, but was still pretty warm. I ran some hot water in the pan, no soap then hand dried the pan and put it back on the stove and heated it up to get rid of any left over moisture. After about five minutes I took a napkin and put some corn oil on it and rubbed it all over the pan and let it finish cooling. Cast iron is kind of like a car. You have to wax it and several thin coats of wax is better than one thick coat. After it was completely cooled down I picked it up and put it away.

While my execution could have been better, it was my first time with cast iron and I really didn’t know what to expect. I was pleasantly surprised at how well it worked and I’m definitely going to be on the lookout for a smaller one in the future. To duplicate my recipe you just do the following:

3 eggs
1 teaspoon of water per egg
pinch of kosher salt
dash of pepper
beat it like hell with a wisk.

Today food in San Francisco is all about gourmet, artisan, etc. words that are usually tossed around more to raise the price than improve the taste. I do have to say though that while it’s a little more work to take care of a cast iron pan it sure beats having to replace it ever couple of years to get the same results. You also don’t have any toxic fumes from the non-stick coating to deal with and you get the addition of iron to your diet. I suspect this pan will just get better and better over time and I hope it keeps getting handed down throughout my family for many years to come.