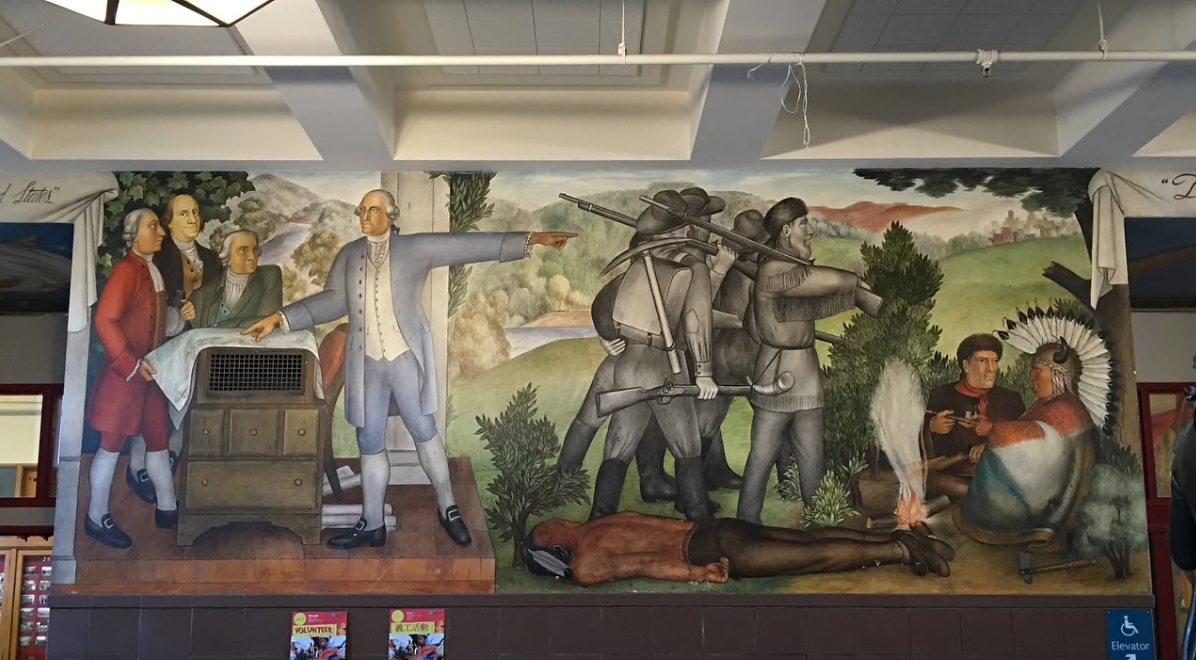 I attended and graduated from George Washington High School, class of 1980. Every day when I walked down the halls I saw WPA on the walls that I knew about not from school teaching so much as because my Uncle Al’s first wife, Shirley Staschen Triest was a WPA artist that helped paint the murals in San Francisco’s Coit Tower.

Apparently a few people who aren’t former students of GWHS and from what I can tell aren’t even residents of San Francisco have been offended by this historical artwork and have convinced the current Board of Education to have it covered up at an estimated cost of $600,000.

I could go into the history of this artwork, but I won’t because this story has reached nationwide status that you can find through a quick google search. I may be a bit naive, but when I attended in the late 70’s I didn’t see it the way those who are offended saw it.

Their offense is with the included photo above. Those offended see Washington directing soldiers to go west and kill everyone who gets in their noted by the dead Indian in the painting.

I suppose I could see it interpreted that way, but I never saw a dead Indian. It didn’t make sense that you’d have a couple of guys [one being a Native American] sitting and having a chat next to a dead body. I always thought he was sleeping because that’s what made sense to me. The soldiers aren’t in uniform and actually are Lewis and Clark who did go west exploring the country. Thomas Jefferson sent them on their quest of exploration, but I guess the truth doesn’t always make it into art. 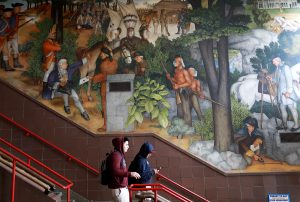 OK, I understand how each person can interpret art for themselves, but there are other paintings that the offended are ignoring. Like this painting.

I’m still not sure what’s going on here, but I see Native Americans interacting in trade with the new Americans seemingly all smiles and then in the upper left we have them attacking surrendering American soldiers. Those offended by the painting focus only on the two slaves working the fields in the upper right hand corner. 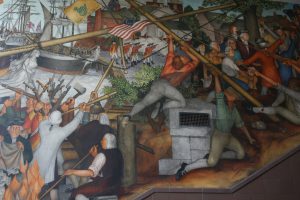 Then there’s this mural painting that doesn’t get brought up either.

Shouldn’t I be offended at the British soldiers attacking American civilians or should I be happy that they’re rising up against the oppression of the English Crown that they came to America to escape? No one mentions this.

These murals were painted by Victor Arnautoff, a WPA artist who was a disciple of Diego Rivera and also [along with Shirley Staschen Triest] helped paint the murals of Coit Tower. In his time with Diego Rivera he began to lean more and more to the left until he became a communist and wanted to show in the murals that the founding of the US wasn’t all nice and rosy.  This is what the people offended by the murals are also saying oddly enough.

While I was unaware apparently there was some concern as well in the late 60’s which caused the City to hire Dewey Crumpler to paint some murals in the school that were more along with the times and far more ethnically diverse. Mr. Crumpler is also against the removal of the Arnautoff murals even though he was hired to paint murals to balance them out.

Art is art and should be preserved for it’s historical relevance to the time it was made. It’s not always nice, neat and pleasant to look at, but it’s necessary because it causes a change in the viewer.

If you’ve read this far, I have started a petition at change.org to Save the GWHS Murals. Will it work? I don’t know, but at least there are many of us making a statement that they would like to see this historic artwork remain and not be covered up at a great expense to the City of San Francisco. If you agree please sign the petition. The SF Board of Education is notified of this petition as it grows.

2 Replies to “Save the GWHS Murals”