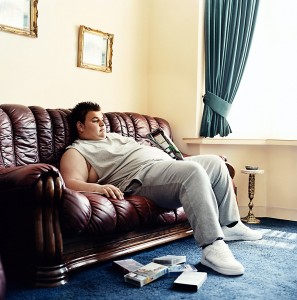 Well my doctor who can be blunt at times, which is good because I tend to take blunt people more seriously told me I was out of shape today and need to walk at least fifteen minutes a day. I kind of got an idea that something was wrong the night of the SF Weekly awards when I walked out of the metro station and by the time I got down to 111 Minna I had broken out in a sweat. I did that walk every day for years and never broke a sweat unless it was a very hot day. So things have changed for me and I sat down and thought about it for a bit.

For the last two years I’ve been unemployed except for a short 3 month stretch with a start up company that required me to sit at home in front of the computer and record voice overs for a cool iPhone app called HearPlanet. It turns out that being that sedentary all day long isn’t good for you. I spent most of my days at my computer, looking for work, doing freelance work or watching Hulu and Netflix and tweeting and Facebooking. This is not a good habit to have.

The weird thing is that I feel like I should look like the guy in the picture, but I don’t. I could lose five pounds, but I don’t look overweight for my age. I’m pretty close to my BMI which is good, but if I break out in a sweat after walking a block something’s got to change. As you may have noticed, my posting has been reduced a bit with my new job. I’m going to need to step away from the computer a bit more now so that I can get myself back to being able to walk six blocks to the store easily. That means I’ll try to have at least three posts a week.

It’s time I turned myself around so the guy in the picture can’t beat me in a sprint. We love our wide screen TV’s and computers and all the big techie stuff you can sit in front of for hours on end staring at here in San Francisco, but it’s not good for you. While my doctor has said my heart is in good shape, I still don’t want to die in my 50’s due to natural causes. Now it’s time to get up and take a walk after which I will call my friend Clint the yoga master down in Costa Rica for some yoga tips. For what it did for him, it might get me back in shape. 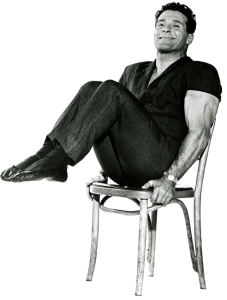