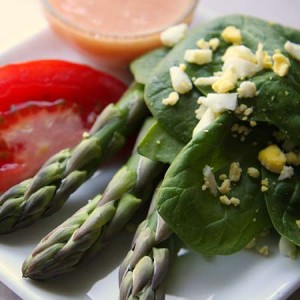 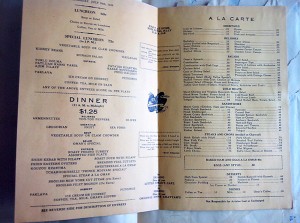 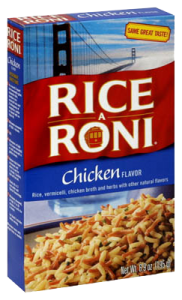 C’mon, ya’ll knew I couldn’t leave this one out right? Well, I know enough about advertising that sometimes they aren’t always telling the truth so I had to do a little research to see if Rice-A-Roni really was a San Francisco Treat.

It turns out they weren’t lying. It all started in 1958 when Vince DeDomenico and his wife enjoyed an old Armenian dish consisting of rice, vermicelli pasta and chicken broth. The rice and pasta were sauteed in butter before the liquid was added, giving the dish its distinctive taste. We call it rice pilaf today, but back then they needed a catchier name that was more American sounding. This was a time when spaghetti was considered an ethnic food remember.

They made a commercial with the cable car coming up the hill and the jingle, Rice-A-Roni, the San Francisco Treat! It was an instant hit. To top that off in 1964 after a trip to Rome and tasting fettucine alfredo they came back and invented Noddle Roni. And by invented, I mean they stole a traditional Italian recipe and changed the name to Noddle Roni Parmesano [it’s now called Pasta Roni].

By 1962 it was available all over the US and was catching on big time and soon because one of the top brands of side dish in the US. Oddly the San Francisco treat didn’t get it’s start in North Beach where most of the Italian families collected, but actually the Gragnano Products Co. which later changed it’s name to Golden Grain Macaroni Company started it’s life in the Mission District in 1912. Sadly, the Golden Grain Macaroni Company that started Rice-A-Roni is no longer a San Francisco treat. They have moved to Chicago where they do business, but the cable car is still a part of the product. They even have a history of the association of cable cars with their product on their website.

The funny part about all this for me was that when I was growing up we had Armenian Neighbors and my Mom being the food snob and cheap wouldn’t make something out of the box, but she’d make her own rice pilaf. I never ate Rice-A-Roni until I was somewhere around 30 living on my own and was a bit lazy at times. I never watched my Mom make rice pilaf so I didn’t know that if you sauteed rice and vermicelli in butter before boiling it in chicken broth you could make this very easily yourself. When my wife and I got married Rice-A-Roni became a staple in our house. Back then, my wife didn’t really cook and I never thought of taking the little extra time to make it. Now things have changed and we make our own, but there are those days when it’s just easier to pull out the box.

For those of you who like the good ole days here’s their first ad which I managed to find on You Tube: