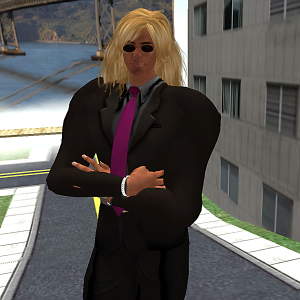 So why you ask am I writing about a video game company when this is a blog about San Francisco? Well, Linden Labs who puts out the game Second Life is based in San Francisco. Phillip Rosedale [aka Phillip Linden] started the company in 1999 as a 3D way to interact with people online. You could play for free or get a premium membership for $9.95 a month. Not too bad by most MMORP games, but this isn’t really one of them. There’s nothing to do in Second Life except, well lead a second life. You can go to clubs click on a ball that makes your character dance. You can shop for clothes [which my “Armani Suit” I’m wearing in the picture cost me $1200L which is equal to about $4.61 by today’s exchange rates] or buy naughty bits and have sex with other characters.

Other than that, there isn’t much else to do. I’ve made many friends in the game in the 5 plus years I’ve played it on and off and many of them have tried to get something other than the dance, shop, sex going but haven’t been successful. This is probably because the game drains you of your finances.

To really get somewhere you have to buy land. Here’s where the tricky part comes in. To purchase an entire sim it’ll cost you $1200. Real dollars, not “lindens” as the currency is known in the game then you also have to pay an additional $295/month tier rate. Now call me a cynic, but through my sponsor you can get 480Gb’s of server space for a flat $119.99 [even less if you use my special code of LGN09]. Asking that much money for a chunk of a server that doesn’t come anywhere near the 480GB’s I’m talking about is ridiculous. Most of my friends who have bought sims have ended up selling them off. I only know one guy who has managed to keep his sim through renting out space to friends to cut his price down. Now that you have land, you’ve got a blank slate and you have to put stuff on on the land like, oh a house? That’s cost you anywhere between$5000L-$20000L. Then of course you have a house, but there’s nothing in it so you’ll have to buy furnishings. Figure on spending another $10000L to furnish the place or you can add another $3000L for a SexGen bed so you can have animated sex while you play, but to be realistic you’ll have to visit Xcite! to purchase the $1200L starter pack of naughty bits for your character.

Now renting is an interesting idea as well. That used to be easy. You wanted 2048m [that’s square meters] you’d pay between $500L-$1000L/week and you’d be done with it. Now it seems that the renters make you pay a fee like you’re purchasing the land then add on a weekly fee. Why does this matter? Well, owning land gives you lots of things like owning land in real life does. It lets you keep people out of your home like in real life, lets you set protective devices, etc. If you don’t own land then you could be walking around and someone pulls out and gun and shoots you. This isn’t so bad in Second Life as you only get sent to your home location, but say you’re working on building something and you get shot. Then you have to teleport back and start back up again only to get shot again. This is called griefing in the game and they do little to prevent it.

I’m not totally against the game altogether. There are some places like San Jose State University that conduct classes online and Nissan that will give you a free Nissan Altima you can drive around, but you have to remember that what you see there isn’t what you get. Nobody is ugly and when people start trading real life pics of themselves you might start to notice that it’s the year 2010, why are they wearing legwarmers and have overly permed hair? I’ve only met one character in Second Life who was ugly and he did that on purpose because he thought it was funny. Everyone in Second Life is sexy. Look at that pic there. That’s one of my characters we’ll call “Eddy” because most people can pronounce his real name correctly. Eddy is a chick magnet and looks nothing like me. I’m not saying I’m ugly, but when I walk into a club in Second Life people notice me. Girls flirt and the guys start to get jealous, not always, but most of the time. This is an aspect of the game that people in SL refer to as “drama”. There are petty fights all the time between couple. I even had one girl asking to have cybersex with me right after she got married in Second Life. Yes, there are marriages in Second Life. While there are a few people doing good stuff, most of the people don’t know what they’re doing and just end up creating “drama”.

When I first started I thought it was a cool idea and if there were people who were old and unable to get around as easily it would be good therapy for them. That’s not really what I’m seeing today. What I see is a lot of people acting like someone they aren’t and not doing a very good job of it. Now I think I’ll run off and check out Mouse World again, someone crazy people actually have rebuilt Disneyland in Second Life complete with the rides. I want to see if they’ve finished the Haunted Mansion. At least that is a lot cheaper than a real trip to Disneyland.