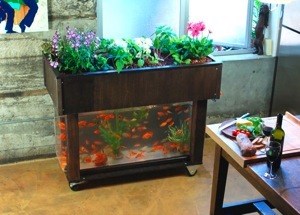 I just read an article on sfgate.com about aquaponics that I thought was intriging. There is a company in Oakland called Kijiji Grows that has created a system that is a combination of hydroponics and aquaculture. Basically, you have a fish tank and the water from the fish tank is pumped up to trays filled with pebbles that have plants that feed off the fish waste and the water drips back down into the fish tank. These systems aren’t cheap, but are elegant in design. If you have $1500 for one they’ll even come out and install it for you.

What amazed me about this was that this sort of thing has been going on in the aquarium industry for years. Large coral reef aquariums needed to be specially filtered because coral is very sensitive. So they started pumping the water up to troughs with macro algae (think of it as a type of seaweed). The macroalgae would absorb the nutrients from the tanks waste and pump it back down to the fish tank. The problem with this is that you needed 1000 watt halogen lights above the algae to help it grow. Now here is a company doing it with sunlight. These are kind of expensive systems, but you could probably do one yourself with a little labor and some handiwork. 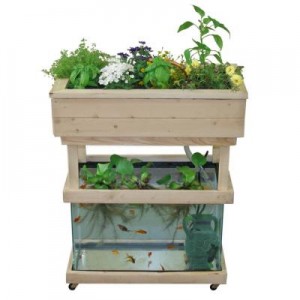 Get a fish tank and powerhead to pump the water up to a rubber container that you place plastic planter boxes filled with cheap aquarium gravel and holes poked into the bottom. Route a hole in the bottom of the rubber container and place it over the fish tank so that the water flows back. What you get out of this is clean water for your fish tank that is well aerated and you can grow your own food on top. You don’t need to space your plants out as much because the roots tend to grow downward rather than sideways. You also don’t need any soil which means no soil borne pathogens. I had a koi pond I built many years ago out of a half a plywood barrel. I painted the inside with marine epoxy paint to water seal it and then found out after a couple of days that it needed to be covered with chicken wire so the raccoons wouldn’t be eating the fish. I could see using this as a way to feed water up to the plants and then have edge of the rubber cut to create a waterfall back to the koi pond. By my estimation, I could do this for under $100 and you wouldn’t have to keep replacing the soil like you would in a normal garden. The set up picture to the right is from home depot and costs about $249, which while not bad if you’re lazy and have the cash you could do better and much cheaper. All you have to do is feed the fish. There have even been suggestions of raising food fish as well so you get a two fold return. This is making me think more about that Tilapia farm I was considering building.

What these systems are best for is places like Africa that don’t have good soil, but lots of light. They can raise fish for food and root vegetables as side dishes. This could eliminate famine in impoverished countries and you can run the pumps from small solar panels.