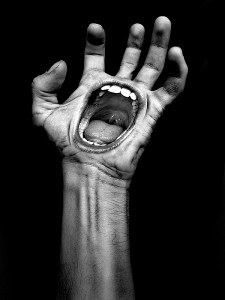 OK, so today I was a little twitchy and bitchy because what I’ve had at my disposal was not my big beautiful 24″ iMac. I have a small MacBook that I appropriate from my wife which has me leaning over the keyboard staring into the tiny 14.4″ screen and the 21″ iMac at work that’s old, slow and like the MacBook, doesn’t have the 500w powered studio speakers to back it up.

This is giving me a feeling like switching from Marlboro cigarettes to Marlboro Ultra Lights. You’re getting something, but just not enough of what you want. This is like 3.2% beer in Minnesota compared a full flavored Boddington’s. It’s like a $2 hook…OK enough of the analogies. It’s just not the same, but I think I can hold out for the rest of the week.

I’ve been finding things to do that most computer geeks like me never think of. Like cleaning up around my “computer squat.” After the iMac was gone I realized how much dust had started to build up on the desk in places you don’t normally get to see when you’ve got a huge 24″ screen in your face. I started thinking, “Geez, this is a man cave…complete with all the dirt.” I actually found a glass from an indeterminant year hidden behind the hallowed place that my iMac once occupied that had the remains of some reddish liquid that could have been fruit juice, kool-aid or both plus of course lots of dust. Since I had the time on my hands it went up to the dishwasher quickly.

I’ve also noticed that there were lots of cords behind the computer that didn’t need to be there anymore because it turns out they hadn’t been hooked up to anything in probably a few years. Did these just grow out of the back of my computer in an attempt to ensnarl and engulf everything around it and turn it into a borg like creature? That would be a very scary thought…”I am Eric of iMac, resistance is futile.”