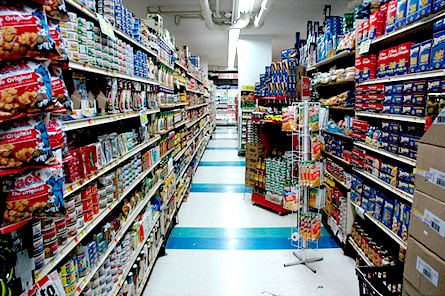 Well I hate to say it, but my Mom died about 3 months ago. It was kind of weird because she died at home, but in the end it was a good thing because she had been suffering for along time and could barely get around and hadn’t left the house for months. This is all a side story that I can save for another time, but the oddest thing that struck me after this was how we shopped.

Since there were things my Mom would need we’d have to find a way to separate things into 2 carts or in the top and bottom of a cart depending on how much stuff we were buying. My Mom used to invite friends over and of course she’d have to feed them so we always had extras on hand. Now we didn’t have to do that anymore which left us with one less piece of confusion. The other thing we realized is that a dozen eggs will last us a month and there were things that were low on our list to eat that we didn’t need anymore.

One of the biggest things we noticed is that we don’t need an 18 cubic foot standalone freezer in the garage anymore. We don’t need to buy 10 lbs of ground meat at Costco because that would last us 6 months (but we still like Costco incase I get the go ahead for that new HD flatscreen in 3D. We also don’t make 10 gallons of minestrone soup or beans and hamhocks anymore so we don’t need a place to store 1/2 gallon empty milk containers  that have been refilled with that kind of stuff. We might get a 7 cubic foot freezer for downstairs just because a pizza won’t fit in our side by side fridge/freezer upstairs and it’s nice to have a few things on hand so we don’t have to shop all the time.

We still find ourselves reaching for the jumbo pack of something and then realize that it’s only going to go bad before we’ve finished it. We have a new learning curve to go through now because before it was just the two of us, then the three of us, then the four of us when our daughter was born. Now it’s just back to the two of us plus our daughter and we don’t have another mouth to feed that was the equivalent of an 800 pound gorilla.

I’m not going to miss the mini tacos or taquitos as they were pretty horrible anyway. I’m not going to miss having 50 rolls of paper towels in the garage which led me to impose an embargo. I’m not going to miss the 100+ jars of spices that I couldn’t remember what they were used for let alone the 30 year old jar of coconut on rack in the sun (no we didn’t bother to open that.) I am trying to find a way to deep fry the lumpia so that my wife doesn’t gag at the smell of the fryer afterwards (suggestions willingly accepted), but I think I will miss the scallops that I learned to like in the last few months.