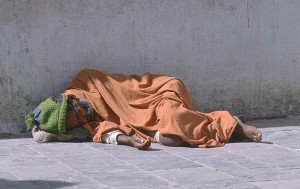 Well the computer’s back so it’s back to focusing on the blog. I’ve decided to make a few changes. While I’ll still be writing about San Francisco I’m going to focus a little more on the Sunset District. Also since I’ll soon have an iPhone I’ll be taking more pictures and video [which I should have done yesterday morning].

As I was walking to the L-Taraval street car yesterday morning to go to work I saw something I hadn’t seen in the Sunset before. A homeless guy asleep on the sidewalk at 33rd and Taraval. I’ve been here for 47 years and the “homeless” people you see usually standing outside a 7-11 are more “financially challenged” than “homeless.” They’re generally pretty clean, some are funny, like Donald who usually hangs out at the 7-11 in the evenings on 32nd and Taraval, or Willy who hangs out in the lower part of Judah street. Willy could use a bath, but I think he’s encamped in GG Park because I never see him asleep on the streets.

You don’t feel threatened by these people, but this guy looked more like the picture. Dirty, smelly and while I can’t say for sure I did see a few open sores that meant he was probably carrying some sort of disease with him. I’m going to start taking pictures and maybe Taraval Police station will start doing something about it.

With that said, we made another trip to the Zoo today. So I’ve talked enough about the zoo so I’ll focus on their food today. Part of me misses the dumb simple food they used to serve, but at least they still have hot dogs. We went to the leaping lemur cafe to have some food and I decided to try their bacon cheese burger because who doesn’t love bacon? My wife had the “gourmet international deli sandwich” which translated into a packaged turkey, swiss cheese and a slice of bacon on a croissant with a bag of chips and of course our daughter had to have some “all natural french fries”.

Price: $22.91. That’s with the 10% members discount too. The food was pretty awful. While they’re trying to come off as a healthy food place like the Academy of Sciences, they don’t come close. The bacon cheese burger was tasteless. All I could tell is that it had indeed been cooked. My wife asked me if I’d like a “taste” of her sandwich. Taste usually implies you’re going to actually taste something. Well, I didn’t. The best bet were the french fries which were actually crispy and hot, but no salt, no flavor. Our daughter enjoyed the fries for a little while at least. This is when I noticed that there were lots of families who brought their food and were sitting down outside eating. Note to self, do this next time.

On the upside we got to see a lot and our daughter had a good time even though we had a lot of walking to do to see everything. They have a new area called Greenie’s Conservation Center that has one of the original 1906 earthquake shacks that was a cool find. It was in great condition and had two lights that were so old that they were probably originals. They’ve got a nice garden you can walk through that’s fed with collected rainwater and, uhm, “animal compost”. I remember they used to sell that for $1 a bag calling it ZooDoo. I suppose it was another attempt to look green, but it was small. They should have taken it a step further or two. There were still lots of empty cages and pits and there were a lot of exhibit areas that are now blocked off by fences, probably because they don’t have anything in the areas there. The only problem with this is that some of these walkways were great cut aways to get where you wanted to quickly. Now you have to walk a long way between exhibits that are clumped together with lots of unused space. You can get a better idea from the map. What they need to bring back with so much walking you have to do is bring back the old elephant train. I wish I could find pictures of it, but they stopped it back int he 80’s.