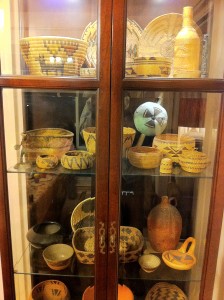 A lot of you may not be aware of this, but San Francisco was inhabited prior to us “white people” moving in and taking over by depending on how old you are the Ohlone [modern term] or Coastanoan [older out of date term] Indians. Yes, I said Indians. To me “Native American” doesn’t exactly fit because I was born here in the San Francisco, California therefore that makes me a Native American. I understand “those people” not liking to be called “Indian” because the explorers who discovered this place [like the natives didn’t know it was here already?] thought they were in India. But that’s really a whole ‘nother story that I don’t want to get into here.

My Mom for some reason got into collecting the “Indian” baskets at a very young age. She had a huge collection of Ohlone, Paiute, well, pretty much every tribe you could find here. Her problem was that she showed them off by putting them on shelves without any kind of protection whatsoever and when she died and we started cleaning things up with noticed how covered in dust these baskets were. 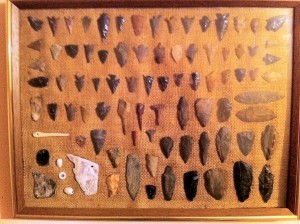 I contacted a few friends at museums locally to see how best to clean them up. A couple of them came out and upon seeing what she had their jaws dropped. Some of these baskets are over 100 years old and in perfect condition. We decided to clean out the cabinet that was holding a bunch of crap glass that was pretty much worthless and cleaned the dust off the baskets to display them properly.

These pictures are just a small part of the entire collection that includes arrowheads, jewelry,  rugs and pottery pieces as well. While 90% of these are from California, there are a few from the southwest along with a collection of Kachina dolls that are still hanging on the wall because we haven’t found a good case for them yet.

What a lot of people don’t realize is that the “locals” had a very good degree of craftsmanship. A couple of the baskets actually had colorful bird feathers stuck into them that gave them a velvety look. Bird feathers unfortunately don’t last long and they’re hard to replace, but the weaving underneath still speaks for itself. While my Mom didn’t have a drop of Indian blood in her as far as I know she might have gotten some from my Grandfather who had the look of a mountain man with those “chinese eyes” as Pete Townsend once said about all the best cowboys. He probably had a bit in him and it might have been passed down. So this is our little museum we have in our house that’s holding up quite nicely and I thought I share a little part of an odd part of San Francisco with ya’ll.