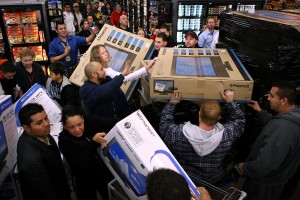 Ah, it’s finally over. I think the reason everyone is happy on Christmas Day is because the insanity that has led up to it is finally over. I was in a Safeway yesterday and was pushed out of the way by the woman who actually yelled to her friend, “This is what I love about San Francisco, everyone stands around blocking the aisles and talking!” Which she did while blocking me and talking to her friend. In the afternoon I took my daughter to the California Academy of Sciences which you can see pictures of in the photo galleries. There was a couple standing holding hands at arms length that I couldn’t go around so I said, “excuse me” FOUR TIMES. I was ignore until I decided to change my phrasing, “If you don’t let me pass I’m coming through you!” “Oh, I’m sorry.” I’m sorry? That line implies we heard you the first four times, but were just ignoring you.

Well, I can put that all behind me now. The crazy shoppers will be gone I suppose until the after Christmas sales start, but that will be only short lived. I didn’t get my wife anything for Christmas except for giving her more time away from having to deal with our daughter which is a delight when you kind of have to work 24/7 on a job that you don’t get paid for. I rewarded myself with a bottle of Knob Creek bourbon and prime rib which we’ll get another dinner out of tonight.

I don’t understand the craziness anymore before Christmas what with everyone being able to purchase presents online without  having to bash it out at a store full of monkeys on meth. Hell, I pulled out my iPhone and ordered a few things from Amazon without having the leave the living room and I got them at a great deal with free shipping and no tax and they arrived on time. So next year, don’t slug it out with people at the stores. Hug your postal worker or UPS delivery guy instead. It’ll make you more sane.

Here’s a few pics of Christmas morning for you at our house.