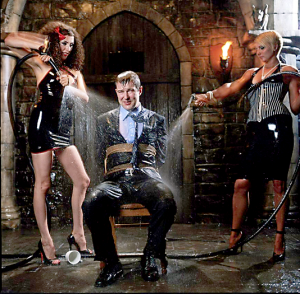 I suppose I have to start this off by quoting Milton Berle, “Sex is only dirty when it’s done right.” Yes, San Francisco has been a city of sin long before there was a place called Las Vegas and let’s face it we do it right. My mother used to tell me about private gay clubs where the patrons would dress up as men and women irregardless of their sex to look like normal “straight” couples walking into a nightclub, but when the doors closed the rules where gone.

Seeing that my mother wasn’t gay, nor has she ever been to a gay nightclub I suppose this was all from, a friend of a friend of a friend information. So now we have an internet company located in the old San Francisco Armory that produces fetish porn for the internet that has become almost mainstream. So much so that when people are pointing their fingers at what’s causing all the problems in San Francisco I never hear kink.com come up. Peter Actworth, a Brit who moved to San Francisco in 1998 is behind it all. That’s him in the picture to the left.

[mappress mapid=”37″]I admit, I have done a little bit of “research” at kink.com to get a better understanding of what they’re about, but seeing as how there hasn’t been one complaint against them by any of the hired models that are in the police reports I figure everything that’s going on is done by consenting adults. Now I will tell you that this site is not for the faint of heart. There are men and women having things done to them that will astound, horrify and to others titillate their senses. [Oh, I’m a naughty boy, I said titillate!]