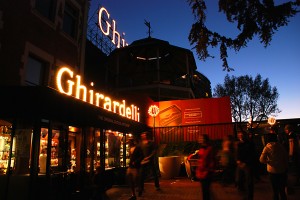 While most people who come to Ghirardelli Square see a collection of shops and restaurants it was originally the home to the Pioneer Woolen Mills before Domenico Ghirardelli purchased it and set up his chocolate making shop. The main focus of the square is the Ghirardelli Chocolate shop that gave the shopping center its name. While the date isn’t properly known, it was sometime in the late 1800’s that Domenico bought and opened up shop in this place.

In the early 1960’s the chocolate making operation moved to San Leandro and there was a chance that the GSQ as they refer to it now would be demolished. Thanks to the hard work of San Francisco Citizens the place was given a makeover adding shops and restaurants and reopened in 1964 with the chocolate shop still intact even if the chocolate wasn’t made there anymore.

For me, I have a fond remembrance of the chocolate shop as a kid because my family started a tradition around Christmas time of driving around the city to see all the big houses that were lit up for Christmas ending the evening with a trip to Ghirardelli’s chocolate shop for a sundae. My favorite was always the Tin Roof which was a basic hot fudge sundae with Spanish peanuts on top.

The businesses have come and gone over the years, but the chocolate shop still remains with the vaguely medieval stone chocolate conche device in the back grinding the warmed roasted cocoa beans, sugar and cocoa butter releasing the volatiles and acids of the chocolate that gives the room its distinct scent that you’ll never forget.

Chocolate connoisseurs will argue over what type of chocolate is the best. Most prefer hand made artisanal chocolate that’s made by impoverished South American’s that are paid a fair trade price for their organic beans. I honestly have no idea where this not quite hand made but not quite fully mass produced chocolate comes from, but it definitely has it’s own taste unlike other chocolates such as Neuhaus or Perugina. It’s not of the chocolate truffle variety. It’s just plain old chocolate. Not much fancy added to it, just milk, dark and now they’ve started adding nuts and a few other things to expand their line up. They don’t tell you the percentage of cacao in each bar it’s just dark or milk and it’s damn good chocolate.

I suppose I should talk about a few things there other than the chocolate shop, but that should really be the main reason for going. More recently the shops have become more food oriented to attract the foodie crowd which in my opinion is a good thing. They have a downstairs indoor shopping mart so to speak that is flanked on the sides by snack places serving upscale versions of common fare such as Pomme Frites and Yap’s Wraps. It’s a good place to stop buy for a nosh, but you have to make a stop by the chocolate shop.