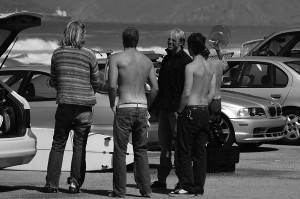 There is a little known fact about San Francisco. We like Australia don’t get our summer in summer. June, July and August are normally in the low to mid 60’s and foggy. It’s actually rare that the sun comes out in summer on even a single day. Well thank you global warming, things have changed.

San Francisco typically has its summer wrapped around people’s normal summer. Usually May the weather warms up and the heat rises only to cool down when June comes around. Then sometime late in August we get our Indian summer which runs up to late October. When we have the El Nino weather it’s gone on to last through New Years where one year I remember barbecuing on New Year’s in 80° heat.

Ocean Beach has never been a place for the faint of heart. You usually need a very rustic bearing of Scottish sea farer to stand up to the hardships that Ocean Beach gives you. That wasn’t so yesterday and it won’t be today either. My weather app told me that we could expect up to 78° yesterday and I had the chance to meet up with an old friend out in the Bayview. When I left at noon I walked outside in steamy 90° heat that you never get in June in San Francisco. I immediately turned on the AC only to realize I was half way home before I could feel that there was cool air coming out of it.

As I got home a sweaty mess it was at least in the upper 70° out by the beach. I double check my weather app and notice that the temps are going to stay hot for the rest of the week. I’m come to notice that whatever the weather app says is pretty close to what happens. At least it looks like we’ll be seeing some proper June weather for San Francisco by the weekend when the temps should drop to the upper 60’s, but it’ll be overcast. THAT is what a summer is like in San Francisco.