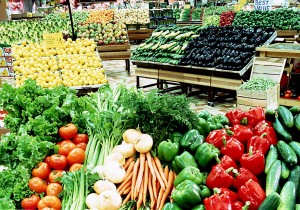 If you had asked me that question 15 years ago I would have said, who cares. I didn’t eat much in the way of vegetables. You’d be lucky to see me eat a potato or have a salad. Most of that changed when I met my wife who was practically a vegan when we met and today I have to ask what happened to the quality of our produce.

I used to be proud when my in-laws came to visit. Going to a grocery store here was like walking into Saks Fifth Avenue. Their eyes would widen at all the fresh produce that was available and how nice it looked. I didn’t realize what it was like for them until I took my first trip back east to see them. The produce sections were scrawny and lettuce meant iceberg lettuce only. Iceberg is to lettuce like spam is to prime rib. It crunches, but has no flavor of its own and should be relegated to being a garnish rather than the base of a dish. I’d need another hand to count the types of lettuce we have available to us out here, but suddenly we’ve discovered a problem…it’s all turning to crap.

We’ve gone to the local grocery stores and produce markets lately and the cucumbers feel like they need a viagra to firm them up. The lettuce is wilted with brown spots inside near the heart. The tomatoes are mushy, the apples aren’t as crisp, etc, etc.

What happened? We’ve even gone to farmer’s markets where we’ve bought organic produce only to come home and find upon closer inspection that most of it is dirty and starting to rot and has to be thrown out. While California is the Golden State, it’s really packed with lots of farmers in the central valley and they grow a lot of what we consume, so why are our fruits and vegetables getting so bad? I talked with one friend of mine who has her own garden in her backyard where she grows her own produce which comes out quite well. She suggested that it’s the travel time from farm to store, but I don’t think that’s as much of a problem when it’s California grown. It could be due to the odd weather we’ve been having that’s throwing off the crops or it could be that we don’t have enough farm workers to do the job properly because the farmers don’t have the money to pay them. All I know is that the quality is getting worse.

Good thing I don’t live in a place where it has to be shipped in. I think I’ll feel sorry for my in-laws now.