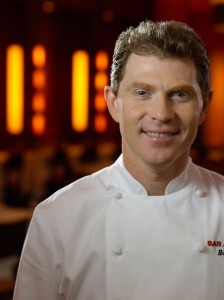 I read an article today that has been on my mind for a long time. Every since the Food Network came to the Bay Area we have yet to see one of the star chef’s open up a restaurant here. Emeril Lagasse, Bobby Flay, Anthony Bourdain [who dislikes San Francisco because of Alice Waters in Berkeley] Mario Batali and the several others don’t want to even bother opening a restaurant here because the competition is too stiff.

Now we do have Wolfgang Puck who opened up Postrio and Roy’s Hawaii Cuisine, but not a single Food Network star has bother with San Francisco. Well I suppose I could include Martin Yan, but he’s no longer a part of the network. I haven’t seen Tyler Florence much lately, but he’s busy with his restaurant here at the moment. Now to me, if you’re going to talk like you’re a world renowned chef you should at least be able to thrown down in Baghdad by the Bay and pull it off. We’ve got some really hefty chefs here already like Michael Mina and Jeremiah Tower who have changed the restaurant industry, but for some reason we scare off the big guns of the media. Had I the money I would travel to one of Bobby Flay’s restaurants with a small camera crew and pull his throw down move with him to get him to come to SF and try his hand in the restaurant business here.

San Francisco, while being seven by seven miles has the largest number of restaurants than any other city in the United States. I was walking around the Embarcadero yesterday and found that there were more places to eat than I remembered. One block alone had six restaurants on one side of the street and these were Subways or McDonalds, but real white linen, sit down restaurants [I’ll still count the Tadich Grill since it’s so good, but no white linen table clothes.]

I like the Food Network and consider myself a bit of a foodie, but not a food blogger. I’ve got more to write about than Mom’s great recipes or the great dishes you can get around town. I watch it at least a couple of nights a week and do have a fondness for Guy Fieri’s Diner’s Drive-in’s and Dives, probably because he’s not afraid of San Francisco. I would love to see some of those Iron Chefs give it a shot in San Francisco, but apparently we scare them off. Could they even handle going up against one of our great food trucks at Off the Grid on a Friday night at Fort Mason? I don’t think so. Could they stand up against the falafel at Sunrise Deli or a shawarma at Yumma’s? I don’t think so.

Bobby Flay, I challenge you and your East Coast Food Network crew to a throw down to open restaurants in San Francisco and see how you fare in our Kitchen Stadium.