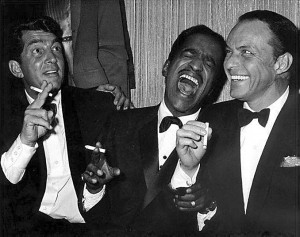 I was a kind of strange kid growing up. I had older tastes for a young kid. While I always liked rock music there was something about a bunch of guys on TV that made me want to be like them and that was the Rat Pack. Started as a group of guys who hung out with Humphrey Bogart, they came down to three guys that were the main attraction, Frank Sinatra, Dean Martin and Sammy Davis, Jr. Peter Lawford and Joey Bishop were kind of honorary members who were included at times, but it was the big three that I wanted to be like.

Being a member of the rat pack wasn’t very healthy by today’s standards. In almost every picture of them they all had cigarettes and a glass of scotch. I’m convinced that’s where I got my love of scotch. I would sneak a beer or two as a teenager, but when I turned 21 there was nothing like the look of sitting and talking with other people with a glass of that dark brown wonder swinging from your hand. I started smoking as well, both of which aren’t good for you as my liver told me one day and when I started to have trouble breathing. So I had to cut back. Besides, having your friends refer to you as someone who drinks old people drinks didn’t help my character as much during everyone else’s beer days. I was always of the mind that real men drank scotch or bourbon, not cosmopolitans.

This isn’t what this article is really about though, this is about the old times and some things that we used to do that we don’t anymore and we might be able to save ourselves some money in this economy if we thought about some of them.

One of them to me was shaving. When I started shaving they had two bladed razors that were pretty good. I never had to used the old safety razors, they were starting to be on the outs then so you went with what was available. Then came the three blade, four blade and now five blade razors. I moved up with each one and realized the other day that even when I’m buying my razor blades online I’m still paying close to $5 for a blade that doesn’t last me a month. With the three blade razors I used to get around 2-3 months out of them before I had to replace them. I learned at an early age how to take care of a blade.

The five blade razors don’t seem to last as long though and I notice that not only is it harder to get the hair off my face, but after a week I start to get more nicks from them. I’ve always taken good care of my skin and I rarely have gotten cuts from shaving, but now I’m noticing them appearing more often.

I want to go back to the old safety razor days. I’m not willing to go for a straight razor as I’d probably slit my throat since you have to manually sharpen them, but the single bladed Gillette and Wilkenson blades of yesterday seemed to be just fine for my Dad and they were cheap as well. You could get like 25 blades for a buck and you’d just replace them once a week. To me that’s a deal.

When King Gillette started the disposable blade business in 1904 he started a revolution. He sold the holders at a loss knowing that men would pay more over time for the blades. It was a success and I heard the other night that because of Gillette and the disposable double edged blade that that is part of the reason all Presidents to this day no longer have beards. It used to be a cumbersome act to go to the barber where a person who was professionally trained with a straight razor would carve the hair off your face. Now everyone could do so in the convenience of their own home.

Another thing that I miss that I did use at one time was shaving soap. Sure it’s convenient to pull out a can of shaving creme and spray some into your hand, but during a period living on my own when money was in short supply I switched to shaving soap with the old fashion boar bristle brush for applying the soap to your face. You know what I found out? It wasn’t much different than the spray foam and a bar of the stuff would last me over a year and cost me a couple of bucks. There was just something more manly about using the soap on your face before shaving. It was old school before people used the word old school. It was a relaxing methodical process that had the benefit that if you wetted your soap with hot water you got a hot lather on your face to make the shaving easier.

So now I’m on a quest. The going back to old schools single blade shaving with shaving soap is making a bit of an odd comeback, but at a higher price. I think I can find something out there that is affordable and will do the job right. If you’ve got an old safety razor you don’t know what to do with let me know. I’ll take it off your hands. I’m going to find the blades and soap out there somewhere, then I’ll have to go purchase some new cufflinks to go with my French cuffed shirts.

2 Replies to “The Rat Pack: Three Guys Who Influenced How I Think.”