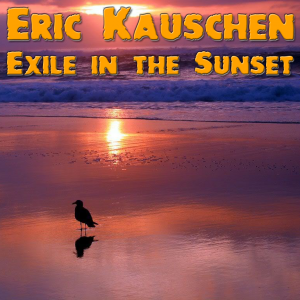 Well, I spent my labor day weekend laboring and I’ve finally got enough songs to put out my next album. It is going to be called Exile in the Sunset because no matter where I go I always end up back in the fog and gloom of the Sunset District. This is another hard rock album that if the names Joe Satriani, Steve Vai, Yngwie Malmsteen and Stevie Ray Vaughn are names you know then you’ll want to check this one out, because they’ve all influenced me.

I’ve got thirteen songs this time and they cover the hard rock versions of blues, classical and just plain guitar wanking/shredding. Part of this is probably due to the fact that for awhile in the late 70’s/early 80’s I had a guitar teacher when I was a teenager who was Joe Satriani. He came out to San Francisco and with a band called the Squares and was teaching guitar to earn a few extra bucks. It was the best money I ever spent. Joe taught me how to move my fingers on the guitar as no other person could. He also taught me how to coordinate my two hands on the guitar to work together which took me awhile to figure out how to make two different parts of me do the exact same thing at the exact same time which made me play much cleaner.

I also have to thank my college professor, Dr. Robert Mortenson who taught me composition. Granted, it was from a classical background, but he taught me how to think about what the other instruments would and should be doing when you composed a piece of music.

Note that the picture isn’t the actual album cover, but more of a place holder for the actual cover that I’m working on right now. If you click on it you can get a free copy of a song on the album called Day in/Day Out. It’ll give you an idea of what the album will sound like. If you’re interested in my music you can find it in iTunes and you can purchase CD’s if you still believe in that ancient format can visit my website: wwww.saundhaus.com and actually purchase CD’s by clicking on the cover photo of the album. Not all of it is rock as I’ve got an odd Danny Elfman, orchestral composer side to me, but check it out. I hope you enjoy it!

Oh and last, but not least…HAPPY BIRTHDAY TO ME! I’m another year older, but I feel like a kid.