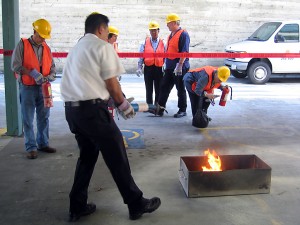 NERT, or Neighborhood Emergency Response Team is a free service provided by the San Francisco Firefighters to help train the public in how to deal with emergency and disaster related situations. Other cities have Community Emergency Response Team classes, but San Francisco, being a bit different focuses on the type of disasters we are most likely to encounter. I haven’t heard of a hurricane ever hitting San Francisco, but earthquakes are up there at the top of the list and this is a good way to get training on what to do in case you’re hit by one or any of the other problems that could crop up with or without an earthquake such as fires, medical emergencies, etc.

My wife found out about this first and brought it up to me because I always used to test her by yelling GET DOWN NOW! and watch her ask me, why? I’d politely remind her that if she had to question me when I yelled a line like that she might end up dead. I can be a bit smug at times and I know that it wasn’t exactly the right situation to make that most effective. Since I had been a Boy Scout and gone through all of this before I figured it might be fun to have a refresher course since it was free as well. There are six classes you take totaling 20 hours. It’s not really that hard or time consuming and it’s definitely not a boring class. You have to be re-certified every couple of years, but that’s just having to take the last two courses.

Well, it turns out what I learned as a Boy Scout isn’t what you’re supposed to do anymore. We were always taught the first thing you do when someone has a severed limb [how many of us have ever been in that situation?] was to apply a tourniquet. Turns out that’s not the best thing to do since you could end up making the person lose more of the limb by killing off blood flow and you should always apply direct pressure until medical professionals can get there.

Remember standing in a doorway during an earthquake? WRONG! It’s actually best to get up against a way because if the ceiling drops in chances are pretty good that a portion will fall at an angle leaving you with a safe place. I also got to learn things I had never thought of before such as teamwork in a situation when some is trapped under say a fallen telephone pole or a car. This was also the first time someone had lit a controlled fire and handed me an extinguisher and told me to put it out. These are handy tips to know and the best part was at the end we got our yellow hard hats and orange safety vests. Yes, some of you might think at times that those outfits look a little dorky, but if something bad comes down like another ’89 earthquake you’ll be glad to see these people. I could go into more detail, but it’s best to get your information from the NERT website.