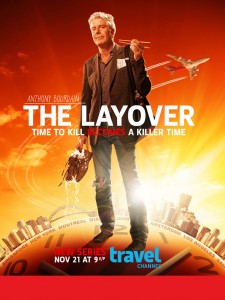 Ever since Anthony Bourdain made his first cracks about how much he hated San Francisco because of the earthy crunchy people like Alice Waters, I’ve tried to get in touch with him to set him straight. He did later, under a bit of duress actually shoot an episode of No Reservations that started to change his mind.

Tony like San Francisco has a colorful past. I’ve heard stories of him nodding off into a slump next to a stove in a restaurant he worked at from doing a little too much heroin that day. I don’t know if it’s true, but it’s a colorful story just like the many San Francisco has.

Tony has a new show that aired for the first time last night called The Layover where he stops in for 24-48 hours in a cities and tries to cram as much as he can into that short time. Last night was Singapore, but in a few weeks we’ll see him in San Francisco. It’s been shot already so I won’t get to meet up with him to tell him about some real San Francisco places to visit. I was surprised at some of the place he went to in Singapore last night so maybe Tony will surprise me with some good places he found that are off the beaten path. Hopefully made a trip out to the Sunset to try some of the food at Thanh Long or had one of the best burritos in the city made at El Burrito Express.

Tony now calls San Francisco a two fisted drinking, meat eating town which it is and more and I hope when I get to see the show Tony found that out as well.