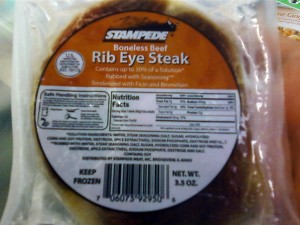 OK, OK, I know this is supposed to be about life in and around San Francisco and Dollar Tree is a national chain, but there’s also a Dollar Tree in Colma, home of the dead people where we sometimes shop because, well, everything is a dollar. About a month ago I saw a $1 3.5oz rib-eye steak and bought one. It took be a while letting it sit in its frozen state, but last night I actually threw it on the grill and here’s what I found out about it.

3.5 oz is about the amount of protein that a person should have with each meal according to the medical community even though they also suggest 2 grams per kg of body weight so at 28.35 gms per oz I was a little under my daily intake per day. On first taste there was an obviously processed taste to it. I thought of what an army issued MRE steak would taste like. I’ve never had one, but this would probably come close to it. It was tender, very tender and compared to the top round steak I cooked with it, I actually like it better.

If you’re a person short on money, but love your meat I’d recommend you try it. It’s not anywhere near steak house quality and definitely not something you’d expect from the House of Prime Rib, but for people on a budget for a buck you could do a lot worse. Due to the high sodium content I’d suggest you have a baked potato with it or a salad with avocado so that you get more potassium to flush the excess sodium out. I think we’ll be picking up a few more of those steaks next time we travel down to the land of the dead just because they’re cheap and we can’t at the moment afford Snake River Kobe-styled beef. The $1 rib-eye’s don’t look pretty, but when you toss them on a grill for a couple minutes they’re pretty tasty.

5 Replies to “I Took One For The Team: $1 Rib-Eye Steak from Dollar Tree”