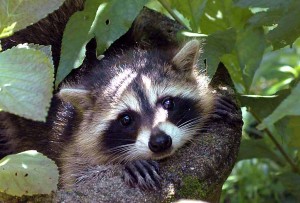 Friday was all about the lack of seagulls so it seems fitting to talk about raccoons today. We made a trip to the zoo over the weekend and while we didn’t see any raccoons, not even in cages there was evidence of them everywhere in the zoo by the small piles of raccoon crap that was everywhere.

How do I know it came from a raccoon? They’re everywhere in San Francisco, I’ve even seen them at night in the financial district. I’ve had a family of them living in my backyard that I used to feed sometimes when they’d come out in the evenings. I know feeding raccoons isn’t the smartest thing to do, but because I’ve been around a lot of them I know what their feces look like. Some of you might remember my article on the horrid sounds of raccoon sex I had written before.

Now when I said they were everywhere at the zoo, I mean everywhere once you’ve given up your ticket and gotten in. I’m actually oddly surprised that no one’s written about this before because unless you know what you’re looking at you may not notice which was obvious by all the flattened patties as we were walking around the zoo.

Actually, the children’s playground was pretty clean as is the entrance where you buy your tickets so the SF Zoo must know that there is tons of raccoon crap since raccoons don’t have any fear of sand or children’s play toys. On the other hand feral cats would use the sand in the area like a giant litter box. I know this because I had a sandbox in my backyard when I was a kid and ended up having to change it over to a large planter box because the cats were using it as a litter box. But I digress…

Walking the zoo you have to be especially careful when walking from the sea lion exhibit to the kangaroo and wallaby exhibits. The reason is that the trees planted there drop acorns that help to disguise the raccoon poop making it harder to avoid stepping in it. I actually saw a little kid trip and fall and luckily didn’t face plant into a steaming pile, but his hand did hit it giving him some lubrication to his fall and boom — face plant. His parents were more concerned at first with the raccoon crap all over their son than whether or not he had actually gotten hurt. Luckily we had some wet ones they were giving out free at the children’s zoo, so I came to their rescue and told them what it was. I’m sure the zoo officials got an earful on their way out, especially after I told them that it’s all over the place and you have to watch out for it.

So does a raccoon sh*t at the zoo? Yes and they do it everywhere.

Now on to the sea gulls. You’ll find plenty of them at the zoo and they are like a mafia crime family. All the food areas at the zoo need to have some notice about this as I see someone get hit every time. My daughter dropped a bagel and bang, there was sea gull casually walking up to it and didn’t even back away when i picked it up. I tore a piece off after I gave the bagel back to my daughter and the sea gull walked casually along with us as we started our walk. I suppose he was not yet a made man in the sea gull mafia family yet so he had to play it cool.

Eventually I tossed him his crumb so he got his vig and walked off. This was one of the nice encounters with a sea gull at the zoo. My wife once ordered a burger and didn’t hold it in close to her body and once again, bang the sea gull took it right out of her hand. Incidentally, if this happens to you don’t bother going back and telling the people that you were just attacked by a sea gull as they will just tell you that you should have been more careful. I can see it happen before it does and it’s usually the people with food on trays who like to hold the tray out in front of them or hold their food up around shoulder height. Why they do this, I don’t know, but the zoo should have some signs warning them like the sign warning people of flying gorilla poop when you’re leaning over the fence staring at the gorillas.

Don’t leave any open food out at the zoo because a sea gull will swoop down for a quick smash and grab. The sea gull mafia is ruthless and I have even seen them fly into the middle of a group of people at a table and steal food. I think the lesser squirrel mafia of the zoo is in cahoots with the sea gulls as I saw a family who left their cart outside the petting zoo with an open bag of chips come out to find the squirrels had swarmed into the open bag and were running off with the contents.

So in short, Zoo, food, sea gulls, squirrels, watch your back.