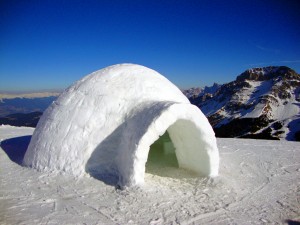 It’s the weekend so I’ll go off course for a bit.

When I was a young teenager I had a mentor, Mark who was working on a degree in Geochemistry. This meant he had to do a lot of field work and I was lucky enough to be asked to accompany him on a tree up north to Lassen Volcanic Park. He was studying hot springs and what better time to study them than in winter. You really haven’t lived until you’ve seen hot springs in winter.

We traveled up to the Lassen ski resort and had to snow shoe about a mile to the Sulphur Works. As we pulled into the parking lot I saw wall of freshly ploughed snow and I got an idea. While we were staying in a hotel we still had a lot of stuff you would need when hiking up to the outback wilderness areas of Lassen. I have an idea I said because this wasn’t going to be a work only trip and i pull a saw out of the trunk and started cutting blocks of snow and piling them up. I can’t find a picture of it, but it looks a bit like the picture I included with this article. Being from San Francisco and not being a skier snow is a fascinating thing to me because I don’t see it. I haven’t seen snow in over 15 years and people look at be funny when I pick it up in my hand.

It was cold and a bit windy out, but we proceeded on and soon had a 10’x10′ igloo built. We crawled inside and found that without the wind hitting you we suddenly felt warmer. A few passers by stopped to take a look and we invited them in. People were surprised at how nice it felt inside a hand built tent of snow. Granted it wasn’t as nice as the ski lodge, but still it was better than standing out in the cold winter air.

We left the igloo and traveled up to the Sulphur Works. The heat of the hot springs had melted the snow all around it and air was surprisingly warm and humid. The strange part of the humid sulphur filled air is that it would freeze on your hair and create little icicles. The water in these springs has an almost unbearable stench and we spent a few hours testing the pH and temperature of the waters there. The smell of rotting eggs was heavy in the air, but when we finished we made our trek back and stopped at the lodge for some hot chocolate. As we walked back to the car we noticed that our abandoned igloo had remained untouched and that there was a beer cooler sitting out side. When we poked our heads in there were a couple of squatters who had taken over my igloo. I told them that I had built it a few hours ago and they were welcome to it.

I built an igloo once, and I liked it.