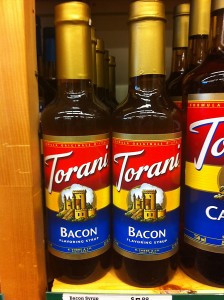 My wife and I were out shopping yesterday and wandered into Cost Plus just for the heck of it. I’ve always liked the food section because you can find odd foreign foods. Well today we found a truly weird food and it comes from San Francisco’s own Torani Syrup and it’s bacon flavored.

I posted the picture you see to the left on FaceBook and that started a mass of comments after I said, I’ll get some as soon as I figure out what to do with it. Torani suggests Manhattans, Old Fashioned, Bloody Mary’s and Milkshakes [GACK!] My friends came up with better ideas, vodka bacon on the rocks, bacon carbonara sauce, etc. I’m sure more will come. I added Chocolate bacon truffles because after trying bacon dipped in chocolate I can see why people like the combo.

Torani has a few suggestions of it’s own in the recipe section such as a Bacon Bourbon Sour, Bacon Alexander, Canadian Bacon and Bacon Margarita. These are all drinks and you can see the whole list by going to their recipes section and running a search for all recipes using bacon syrup.

Something I thought of afterwards was that there is no bacon involved in the production of this just like with Bacon Salt [which incidentally is one of my favorite things to add to french fries or popcorn], so that means that it’s kosher and vegan friendly as well as being fat free.

Everything bacon seems to be the new thing with Baconnaise, Bacon Pop, Bacon Lip Balm. Hell, I’ve even heard that there making a bacon flavored personal lubricant. So expect to see more and more of this sort of thing because as almost everyone will agree, who doesn’t like bacon?

If I haven’t given you enough on bacon then you might want to read this blog.