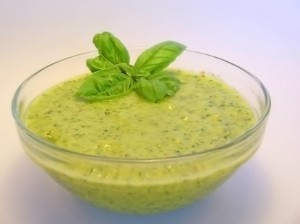 While I have a Germanic last name, I grew up in an Italian household. My family traces it’s roots back to Genoa in the Ligurian provence of Italy. As a kid what we ate was considered ethnic food. For most kids my age Italian food consisted of Spaghetti-O’s. For us it was pesto. It was something no one had heard of and you never saw it on the menu’s in Italian restaurants.

I learned how to make from my Mom who learned it from her Mom, etc, etc. When my Dad lost his job and we were low on cash we had pesto with tagliarini pasta at least once a week. Tagliarini is kind of like fettucini only thinner. When basil was in season she’d go to the farmer’s market down on Alemany and get a box sometimes two boxes and then the chaos would begin. I got the job of stripping the leaves off while my Mom and Grandmother would pull out their wooden bowls and mesaluna’s and start chopping the basil. It wasn’t the real way you’re supposed to make it as it was normally ground with a mortar and pestle, but these were more modern times pre-cuisinart. I loved it and ate it up by the piles. A couple of nights as a kid I had it before going to a Boy Scout meeting and apparently all the garlic that was in there became very apparent to everyone in the auditorium.

After I got done with the leaves it was time to grind the pignoli [pine nuts] and chop the garlic…lots of garlic. I think I had the easiest jobs of all. While pulling the leaves off the stems was tedious it wasn’t anything compared to chopping the leaves with the archaic double bladed knives that probably dated back to the 20’s. When the chopping was done my Grandmother would put the chopped leaves into a large bowl and slowly pour in olive oil [not the traditional Ligurian extra virgin olive oil, but good enough] and slowly stirred the chopped basil and oil until it got a creamy texture. Then I got to add the pignoli and garlic and finish up the stirring. My Mom would then start jarring up the extra and that would go into our downstairs freezer.

We always saved the last bit for dinner that night and my Dad who used to work down in the Marina would be told to drop by Lucca’s and get some fresh tagliarini for dinner. Typically you add some parmesan cheese to the mix, but my Mom and Grandmother always liked to let us decide how much cheese we wanted on it. This tradition carried on for years until a day in the 21st century my Mom wanted some pesto, but didn’t have it in her to go through the process. I suggested we try the food processor and of course she balked.

So I bought a bunch of basil picked the leaves and threw it into the food processor we had at my house. I tossed in about 5-6 cloves of garlic and a little olive oil and turned it on. Slowly adding a little bit more and more until it looked about right, but I left out the pignoli because I was lazy and they’re kind of expensive. We found some fresh tagliarini at a local upscale grocer who I won’t mention and brought it over to her house to make dinner one night.

Where’s the pine nuts? OK, I should have expected that. How’d you make it? You don’t have all the…wait! You made it in a food processor? Yes ma, that’s what I did, so do you like it? She liked it and started doing it that way herself.

Now pesto is everywhere. It’s in mayonnaise, on pizza’s someone will probably make a pesto chocolate bar soon. I see it all the time at the supermarket, but I’ve tried it a couple of times and I still go back to making it myself. It’s cheaper, fresher and just reminds me of good times in my past. Incidentally, if you substitute Italian parsley for the basil you get a great South American steak sauce called chimichurri that I’ve written about previously.