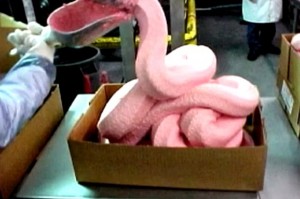 Seeing as it’s the weekend I can move away from San Francisco and talk about a term coined by Dr. Gerald Zirnstein, Pink Slime. It’s a term used to describe boneless lean beef trimmings that are ground up and processed as an additive to regular ground meat. Since the term is a pejorative one to denigrate this product I thought I’d do a little background research about this horrific meat product that is on everyone’s lips nowadays.

When I first heard the term it was used to reference ground up chicken that  being used to make chicken nuggets. There was no reference to it being used in ground beef, but apparently now I’ve found at least a dozen articles on it yesterday. There are two companies making this product and they are BPI and Cargill. Most of the articles while not mentioning BPI are focusing on it because they use Ammonium hydroxide to sterilize the meat because they are trimmings usually considered not fit for human consumption. This isn’t added to the meat, but the meat is washed and rinsed in it. The meat which people are saying isn’t fit for human consumption wouldn’t really be allowed for humans to eat, so it’s more like meat humans don’t normally eat. To those in the nose to tail brand of eating this is what is known as offal. When you slice open a cow the insides containing intestines, liver, kidneys, heart, etc are what come out and there are very few people that are meat eaters that go for this [except for the few liver and onions types or the steak and kidney pie types]. This is edible, but takes a bit of cleaning up before you cook it. Cargill by the way uses anti-microbial treatments to make it safer to eat not ammonium hydroxide.

Now if you go for the muscle parts of the meat that most of us eat there’s nothing used to sterilize it which is part of the reason we get food poisoning, mad cow and all those other diseases. Pink slime is a sterile, processed meat product. Sounds awful doesn’t it? Let’s talk about Tofu for a minute. It’s a processed, fermented soybean product that doesn’t occur in nature. If we called it processed rotting bean paste it wouldn’t be a good advertising tag line. Would you purchase bee barf? I bet you have. That’s called honey. A study was done in New York where they walked around Central Park telling everyone about the horrors of consuming dihydromonoxide. It’s present in everything we consume and if you consume too much of it, it will kill you. As it turns out, the public doesn’t know basic chemistry enough to understand that what they were talking about was H20, i.e. water.

I am not saying that beef innards are high on my list of things to eat. I’ve never eaten sweetbreads [nice name for a sales pitch] nor have I had kidneys or liver [I may have had foie gras once], but the grinding together of these innards and sterilizing them still leaves them as being 100% beef in origin. I remember a local hamburger joint when I was a kid that sold 25¢ hamburgers that everyone said used sawdust as a meat filler. THAT would be a questionable additive. Come to think of it I have eaten 100% beef hot dogs so I’m sure there were some innards mixed in.

Jamie Oliver who I enjoy watching demonstrated the way he thought Pink Slime was made by grinding meat and dumping ammonia on it saying this was how it’s made. That’s not true. The innards and trimmings when ground are exposed to ammonia gas then washed [BPI] or exposed to antibiotics [Cargill]. Much different than what was being told to us. There was a study published about the perils of Pink Slime which was later pulled as having some serious errors and that it was not harmful to human consumption.

What we have is people reading food labels and seeing ingredients that don’t sound like they’re fit for human consumption and then isolating them then writing up everything about the horrors of what this will do to you supposedly. Pretty much everything we eat today has been processed in one form or another. You don’t know what portions of the cow go into your ground beef. A can of soup usually has more than half you daily salt intake. Many of your store bought fresh baked cookies contain anti-freeze to make them soft. I’m not even sure if the picture I used up above is truly Pink Slime. It’s been associated with it, but I have yet to see a video that proves this to be true. Most of the fast food restaurants have stopped including Pink Slime because of the public outcry, but if you buy a beef and bean burrito from your local 7-11 look at the ingredients and I’m sure you’ll see beef heart as the source of beef. I shudder to think what their nacho cheese is made of. It always looked like yellow Elmer’s glue to me.

In the end, it’s not something I’d choose to eat, but the vilifying of an ingredient that when you take a look at it isn’t as horrible as it sounds by the name someone has applied to it just gets my yellow journalism radar turned up to 11. Now it’s time for me to go and have a cup of rotten dried leaves steeped in boiling dihyromonoxide with a spoonful of bee barf [That’s tea].