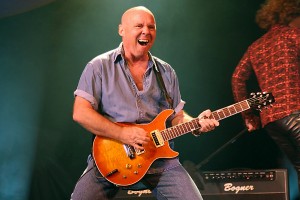 I woke up yesterday morning to find out that Ronnie Montrose had died of prostate cancer. It was a sad day for me because he was yet another person who helped me learn to play guitar. I had been taking lessons for about six months from my first teacher Alex Bendahan at Tree Frog Music and I new the chords, but I couldn’t wrap my head around guitar solos. There was one song that at the time was stuck in my head, Matriarch by Ronnie Montrose and I wanted to learn the guitar solo and Alex was trying to teach it to me. I just happened to be lucky that day because Ronnie walked into the store.

We had small amps in the tiny rooms where we were taught, but they were loud enough to carry across the small store that we were taught in. Alex would have me bring in tapes of songs I wanted to learn and he would teach me the songs by listening to them and figuring out the chords. Ronnie heard us getting to the solo part and walked back and pulled the curtain back on the room. I was frustrated with the fact that I just couldn’t understand how to play the solo. I knew the scales and everything, but I couldn’t put the two together.

Ronnie after pulling back the curtain said to me, you have to feel the solo then let it out. He took my guitar from me and started playing the solo along with the tape I had brought in.He wasn’t playing the exact same solo, but it still fit with the song. The exact notes didn’t matter, but he put his soul into it and then it clicked in my head. He handed the guitar back to me and said, now you try it. Alex’s band was fairly well know at the time so he knew Ronnie and just laughed at the whole thing and told me there would be an additional charge for today’s lesson. Alex rewound the tape and and I played along until the solo and just stopped thinking and a solo came out of me.

Ronnie was a good man and a great guitarist who was under appreciated. Sure everyone knows him for Rock Candy which was probably one of the heaviest song of the 70’s and gave Sammy Hagar his claim to fame. Years later my band lost a bass player who had an offer to join Gamma, Ronnie’s new incarnation of a band that later spun off to the Davy Pattison band after he left. It was kind of ironic that the guy who taught me how to play a guitar solo later stole one of my band mates. I guess you have to pay up at some point.

I couldn’t find a video of Matriarch on YouTube so you’ll have to do with Sammy and Ronnie playing Bad Motor Scooter: