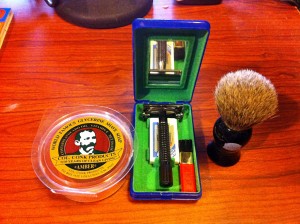 I talked about old school shaving once before and I on Saturday I received my shipment of old school equipment. San Francisco has it’s fair share of high priced shaving stores such as Art of Shaving, L’Occitane and Nancy Boy [really? You all know that’s a British euphemism for a gay guy]. I went even more old school and for $50 I managed to get shipped to me a full on old school shaving kit.

I received a Weishi 9306c butterfly double edged razor with 5 Dorco blades in a case, a British made badger bristle brush [a preferred style] and a 3.75oz bar of Col. Conk’s shaving soap. West Coast Shaving delivered quickly and at a good price. I am very happy with the products I received and can now begin to feel more manly in the mornings when I shave.

To switch over to a safety razor takes a bit of getting used to. You don’t shave the same way you do with the multi-blade or disposable razors. It takes a bit more finesse, but in the long run will save you a lot more money. First off a blade will last you a week or two and only costs you about 10¢ or less if you know where to shop. The shaving soap will last you a year if not more so after your initial investment figure you’ll be spending about $6 a year to shave versus what I was paying which was over $6/month for Fusion shaving gel and 5 bladed razors.

Now let’s talk about the products. The Weishi 9306c is modeled after the 1959 Gilette safety razor and is a gun metal black, not blue and has a lot of weight to it [can you say heavy metal razor?] It feels good in my hand and it has a really beautiful old school look to it. When I put the first blade in I realized something I hadn’t realized in years — Razor blades are f*cking sharp! I actually scraped off a bit of my finger nail when I accidentally hit the edge of the blade and have a small cut on my finger because I was a bit sloppy getting it out of the paper wrapping [judging sharpness of a blade usually suggests scraping it against your finger nail at a 90° angle]. Once I had it in the razor and clamped it down things were fine.

Something you have to consider when you go back to old school shaving is that the paper and blade that you use with a safety razor are fully recyclable. The soap that you lather up with doesn’t come from a can and it usually very earth friendly glycerin based so you’re not polluting our waters and not supplying more metal to recycle if you remember to even toss the can in the recycle bin and not in the trash. Then there’s the brush which I found out was not made from the hair of slaughtered badgers or boars, but is actually shaved off the animals once they are sedated so they can grow back more hair to be shaved again [because honey badgers don’t take sh*t from nobody!] Pretty nice deal for my animal loving friends.

Now let’s get down to the shave. One of the things I first remembers from years ago was that after letting the brush soak in hot water and then applying it to the soap is that the I was actually getting hot lather on my face. Canned shaving gel/soap is always cold. There have been products to warm it, but they never quite work and then there are those that add chemicals to add warmth to the gel/soap that probably aren’t the best for the environment. The soap lathers up richly and covers my faces thick and efficiently. Now it’s time to bring in the tool of Sweeny Todd. Well, maybe not the same as that was a straight razor since this is a safety razor, but you still have be careful as you have more chance of cutting yourself that with a more expensive disposable blade. Keep the blade at a 45° angle and start your first shave with the grain of your beard. I being someone who never had to use a safety razor aways shaved against the grain to get done faster and have a hair and skin composition that this works well with. You’ll probably have to do a second pass, but if you’re a beginner with DE safety razor’s this version of the Weishi 9306c is a good choice. It is very forgiving. It was so forgiving that after the second pass I grabbed the old fusion razor to finish up to a baby’s butt smooth finish, so next time I’ll try against the grain again. Next time I try it I will take the risk of going against the grain since while I have somewhat sensitive skin, I have a light beard.

After your first attack you’ll have to lather up again and go for a second pass. Now depending on your face and hair texture you can go against the grain for a smoother shave. I have baby’s butt skin and not too course hair so I am lucky. After I’ve shaved you could lick my face and not feel a rough spot anywhere [not that I’m asking for anyone to do that.] The upper lip and chin or goatee area of the face take a little more work, but once you get the hang of it you’ll get them all smooth. I was surprised at the number of videos on youtube.com on how to shave with a safety razor, but I have to say that they helped me a lot.

First time, two passes and I’m baby butt smooth. Afterwards I splash on a bit of witch hazel as an after shave since it doesn’t sting and rinse the smell off then add a finishing moisturizer to seal off my skin and keep my skin looking better than some people in their 20’s.

While it may not be for everyone there is just something about the feeling of going old school in the shaving realm and if it ends up cutting your cost of shaving to less than a 1/10 of what it was with the mass market products which will give you money to spend on other things then I say go for it. I would also suggest getting a sampler pack of various blades as each person’s face deals with a blade differently.