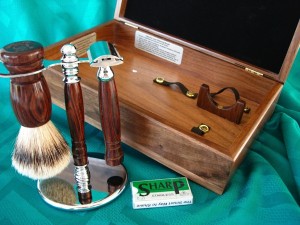 So on my first chance I tried the new double edged razor and shaving soap and found them to take a bit more time and needed some help at the end from the fusion razor to get a good close save so I decided to test in various combinations to see which would work out the best.

Next shave was with the 5 blade fusion and shaving soap. It was faster, but just as close a shave as with the double edged razor [probably because I finished up with the fusion]. I can see using these in a hurry, but I’m also used to shaving against the grain with the 5 blade fusion which probably was why it’s faster. In both cases no nicks or blood in either case which in my opinion is good.

Third time is the double edge with fusion gel and shaving against the grain. No problems here. Took a little less amount of time, but I still had to finish off with the fusion in a few places. I’ve been told while reading around that the Dorco blades that came with it are not very aggressive, well now I understand that means they are so sharp, but I did get almost as close with a double edged razor blade than I did with a five bladed razor that cost about $4.87 each as opposed to the double edged blade that I can get for around 8¢.

Four time is the double edge with Col. Conk shaving soap and against the grain. Still not as close a shave. I think I have to get some sharper blades since I once again had to finish off with the five blade fusion, but it was faster. I have a sample pack on order from West Coast Shaving and should have them by Monday. From what I’ve read the Dorco blades that came with the razor aren’t considered very sharp. In the mix of blade is a set of Feather blades which are supposedly not for the timid or untrained in double edged shaving. I think I’ll wait a bit until I’ve had enough practice to try those, but I think I’ll have this down in no time. So far not a single scrape, nick or cut. If anyone out there still uses double edged blades and has some blade recommendations I’d love to hear them.

One Reply to “My Manly Man Experience First Week”