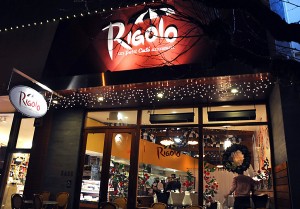 I had a chance today to walk around Laurel Village. It’s been awhile since I’ve been over there, so I wanted to see what’s changed. Well, not much, but that’s not necessarily a bad thing.

My wife calls it the Baby Mecca which I can see from all the strollers, er, strolling by. Now I had a lot of replies about the Marina being too white and I pointed out that it wasn’t too white, but too homogenized. You don’t here any accents there. Yoga pants and tight jeans are the style and there aren’t any fat or old people there. Well Laurel Village is a lot like that as well.

You will find older people that are a little over weight and the moms on stroller patrol tend to be older moms, but for the most part it’s very homogenized and the people there have lots of money, but also like the Marina all the non-white mom’s which strollers have white babies, oh wait, those are probably the nannies.

You’d have to just to shop here. There’s an A. G. Ferrari’s, Bryan’s Market [organic asparagus $8.99/lb and I won’t even go into the meat prices there], Cal-Mart, a little cheaper than Bryan’s, but still up there [$6.99/lb for non-organic asparagus]. As for places to eat there’s Rigolo, which is a little above my In-N-Out burger price range, but I’d like to try it some day even though the words artisan and  artisanal are all over the menu. I saw quite a few people sitting out in front around 9:30am eating salads I guess for breakfast [salad for breakfast? I’ll never understand the French especially when they give their restaurant an Italian name].

There’s Asqew Grill which I’ve talked about before that’s in my current once every three month splurge price range, but is pretty inexpensive compared to most restaurants. The food is good there’s hardly any wait during the day and the food comes quick.

For the cheap eats people you’ve got Starbucks and Peet’s for coffee and a snack and Noah’s Bagels for the cheap nosh [Now if I could only get them to bring back their grilled cheese sandwich]. You can also grab a sandwich to go at A. G. Ferrari, but you’ll be paying a little more than at Noah’s.

Oh and did I mention everyone’s like, really nice there. I went into the old Hallmark 5 & 10 store which I suppose now means $5 & $10 and not 5¢ & 10¢. Everyone who worked there was asking if they can help me find anything. It’s the one thing that hasn’t changed too much when I was a kid. It’s kind of a hardware, card, toy and kitchen store. If you get a chance you should definitely check out this neighborhood if you’ve got amount of money in your bank account.