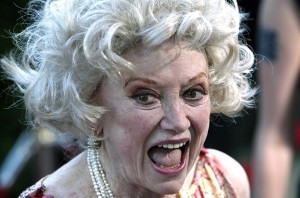 I shed a tear today when I discovered that Phyllis Diller died. Many of you vaguely remember her, but I as a young kid in the 60’s remember her well from her TV appearances. Here hair defined the term fright wig, but while she looked scary as hell she was always funny and it was that old school vaudevillian comedy.  I actually ran into her as a child when my Mom pawned me off to my Uncle Al. I was about seven. I think I screamed or wet my pants at seeing her in person because she was scary and loud.

While she wasn’t born in San Francisco, but she got her start here at a little club called the Purple Onion. A strange club that my parents used to tell me was at times secretly a gay club where one of the gay partners would dress as the opposite sex so as not to be so obvious. For a female comedienne with a husband named Fang, this was the perfect spot for her. It was quite a club with a bit of an odd bent to it. The Smothers Brothers recorded an album there, Richard Pryor did some of his earliest shows there, I believe Lenny Bruce even got arrested there for his obscene performance which didn’t involve anything more than talking.

It’s a dingy cellar club that had a kind of warm feeling to it like your local dive bar, it’s ugly and dirty, but it’s your place to call home. Beat poets would hang out there for the cheap drinks if Vesuvios was too packed. My old Uncle Al frequented the place with his buddy Larry Ferlinghetti I’m sure.

It’s changed quite a bit since it opened in 1952 unlike Phyllis who has had that crazy old woman look since I was a child. I miss her and am sorry to see her go, but I’m sure her there will be lots of shows on for us in the next few weeks to remember her.