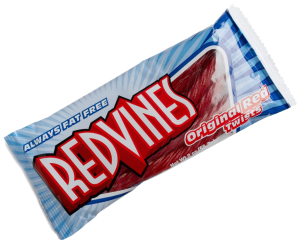 Well they aren’t really made in San Francisco, but as I was looking over the ingredients in a bag of Red Vines last night I found they were made in Union City, CA which is in the Bay Area. Out here in the West when you say licorice, everyone thinks Red Vines. As a kid like the rest of us we’d go to the corner liquor store and they’d always tub of them on the counter. When we’d go to the movies, we’d always get a box of Red Vines. I never realized we did it because that was our licorice.

The funniest part is that when I looked at the calories on the bag per two twists I can’t believe never got totally obese eating a whole box as a kid. I do remember having the black Big Twists a few times [my grandmother believe only black licorice was real licorice] and occasionally I might find the Grape Vines, but on visiting the Red Vines site I found that they also make Cherry Vines and Strawberry Vines which I think I remember trying once or twice, but they also made Spearmint Twists, Choco Twists [I remember trying those and I’m glad they pulled them].

They were originally made by the American Licorice Company in Chicago [which is now out here in Union City as well] and set up their West Coast division in 1925 and it’s been there ever since using old school ingredients and none of the chemical garbage you find in your candy today. One of the funny things is that Red Vines after opening here in 1925 actually made a pair of licorice shoes for Charlie Chaplin to wear and eat in his movie Gold Rush.

When I first moved out of the house I sort of went back to my childhood. I was shopping at Costco one day and noticed a big tub just like all the little liquor stores used to have on the counter. I had to get it as a house snack. Oddly enough when friends would come over, no matter what age they would see it, laugh at me then dig into it and sometimes had to be pulled away. I always liked the tubs because they stayed fresher that way. If you cut a bag open and didn’t finish it in a week it became the candy equivalent of civil war hard tack. This has always been my favorite non-chocolate candy, so much so that I’m munching on some twists now as we speak.

My wife and I always have a bag around in our snack basket in our living room. I’m thinking next time we’re at Costco we buy a tub. It’ll keep them fresher and keep from me getting whiplash when I have to bite into a dried out one. Now how many of you remember biting off both ends and using it to drink a coke as a kid? I can remember a few restaurants from years ago that used to serve their cokes to kids that way.