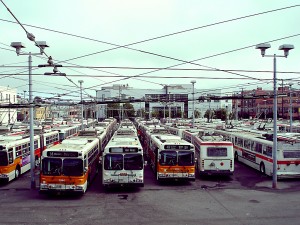 I haven’t really had to ride Muni much in over three years. In the past three years most of my jobs have been work from home or drive from home jobs, so aside from the rare occurrence I apparently have been lucky. I used to hop on the 48 Quintara which is the only reliable bus in the city, get off at West Portal and hop on any metro train to go downtown. Sure there were a few grumpy faces, but for the most part all was good.

Well things have changed. Now things are fine until you get off somewhere downtown and getting out of the station is like running the gauntlet. I’ve heard about people being shot in the stations, one guy was stabbed in the head, then there is the crazy women who walks around in a heavy coat talking to no one who is interested in listening to her yell things like, I know why we have an AIDS crisis and nobody else does. It’s because we have people f*cking in the mouth! Nice morning commentary Gretchen Carlson.

If you’re traveling on the cheap to San Francisco you don’t rent a car you take the bus everywhere. When I took a trip to London I didn’t rent a car, I took the metro and it was pleasant. Did you know they have ice cream dispensers in most of the tube stops? When I was in NY, pre clean up, the trains while having a few shifty looking characters on them ignored you if you ignored them. We like to show everyone that we’re at the forefront, so why can’t we with Muni?

If you need to get anywhere fast you take the metro. From the Sunset District if you try and take a bus downtown you will definitely take twice as long as the metro and your entire ride will be accompanied by eau de urine. This is what we don’t want the visiting tourists to see. People not of San Francisco like to call us smug, but how can we be smug when our public transportation sucks so bad?

OK, we’ve got the cable cars and F line. Those are more kitschy tourist attractions than something very many people use to get to work and they run on their own tracks. We have new metro cars, but our buses haven’t changed much over the years. We had a few testing free wifi, but I haven’t seen those in about five years. The metro when it goes underground needs cell and wifi service. San Francisco needs to move forward, not at a standstill or move backwards. We are one of the top tourist cities in the world, but how many people come back more than once that aren’t driving? Also shouldn’t we make it safe for those of use who have to commute to work? Muni needs a major overhaul and it needs it now.