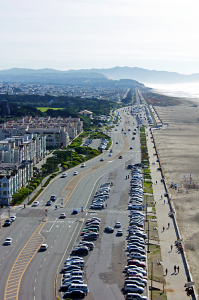 Well, I wasn’t the first to this story, so I’ll give credit where credit is due to my friends at Ocean Beach Bulletin.  Our beach is different than most other beaches. Just about anywhere else beach front property is expensive and in high demand. In San Francisco, it’s the place where they put a lot of low income Section 8 housing.

You have to be born and raised here to find anything fun at Ocean Beach except on the few warm days we get out there when the beach is packed. It can be so nasty out there some days that I’d have to say it’s worse than Coney Island in December. It was so disliked at one point in 1980 that a group of condos were built on the remains of Playland at the Beach and nobody wanted them. I could see the value in the future and when they’re were trying to dump a four bedroom condo with an HOA of $25/month on people for $13k I wanted to use an early inheritance from an Aunt to purchase one. While my parents didn’t like the idea, they would now if they saw that they are selling for over $500k.

The Great Highway itself is kind of a mess. I’ve written letter upon letter that they need to do something out there. When I used to live closer to the beach and had to cross over from the Sunset to Richmond to do my grocery shopping I’m sure that’s part of the reason my car’s wheels needed re-alignment every six months. The asphalt was garbage and there were potholes everywhere. With the passing of Playland at the Beach there was only the Beach Chalet and Safeway to go for shopping out there.

I’ve been using social media to try and get some food trucks out there on nice days. They wouldn’t really compete with the Beach Chalet and give visitors more choices. They could use a little something more out there to bring people out to the beach, but you also need nice roads with median lines you can actually see.

The part of the Great Highway that runs from Lincoln Blvd to Sloat also needs work especially to keep some of the sand off the road which closes it down frequently. I read that they’re planting a new median, but some more ice plant on the ocean side might help a bit as well. Work begins this week so keep an eye out if you drive around that area.

While I can’t take credit for it at least they’ll finally be doing something to get the place to look nicer. The redo will run from the Point Lobos parking lot where the Lands End Lookout is to Sloat Blvd and Great Highway. I’d really like to see some more added to the beach area to bring people out there. Now that we’re having climate change around the world we’re having less nasty days and more nice days, but the wind on the beach is still a bitch.