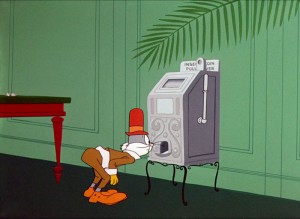 I figured this would be a fun one to start the weekend off with. While I was looking for movies filmed in San Francisco I actually found a cartoon that was based in San Francisco and it was none other than Bugs Bunny himself. While they do use a few very NOT San Francisco phrases like calling it ‘Frisco it’s still a fun look at how cartoons viewed old San Francisco.

Here’s the story behind the cartoon according to Wikipedia:

Bugs is tunneling cross country to meet his cousin, only to run head first into a boulder which is a large nugget of gold. Bugs is considering keeping the gold safe, while Nasty Canasta sees this and sets up a simple stand claiming to be a banker who can safely store Bugs’ gold. The rabbit falls for the ruse. When Bugs decides to ask for his gold back, Canasta claims the bank is closing and traps the rabbit in the folded up stand while he rides away with the gold. Furious, Bugs vows revenge.

Six months later, Canasta has used his ill-gotten gains to start a casino in San Francisco which is shamelessly rigged in the house’s favor. Bugs enters the casino in the role, playing a hopelessly naive country boy who confuses a slot machine for a telephone. When Bugs uses it to phone his mother for some money, he hits the jackpot much to Canasta’s shock. Hoping to recoup this loss, Canasta convinces Bugs to stay for a game and thinks he is maneuvering the apparently easy mark into playing a game of roulette on the pretense of it being a game of marbles. To build his would-be victim’s confidence, Canasta arranges for Bugs to win on his first spin, but Bugs develops a winning streak on the same number (#23). Having nearly lost everything, Canasta covers #23 with a block of wood and sets the wheel up for the marble to stop on #00, but when it does his subsequent striking the table in triumph causes the ball to accidentally bounce and hammer into the knot of the block of wood, thus Bugs wins again.

Now desperate to win back Bugs’ now massive winnings, Canasta convinces Bugs to try playing draw poker and Bugs literally draws a picture of a fireplace poker. Bugs then pretends to misinterpret Canasta’s description of the importance of having the biggest hand to win by blowing up his glove into a giant balloon. Canasta loses his temper at his would-be victim’s obtuseness. Bugs threatens to walk out, forcing Canasta to grovel in order to coax Bugs to return to the game. Canasta soon regrets that when Bugs, after staking all his money, promptly wins with a Four of a Kind consisting of Aces (Two pair. A pair of ones, and another pair of ones), trumping Canasta’s Full House.

Now with his casino’s bank irreparably broken at the hands of this simpleton who seems physically incapable of losing, Canasta decides to rob Bugs at gunpoint on the pretense of it being another game of chance. Bugs, still keeping in character, naively spins the revolver bullet cylinder like a slot machine and a mass of coins inexplicably pours out the gun’s barrel.

As Bugs’ departs with all the casino’s funds and more, Canasta greedily tries to win money from his gun, only to shoot himself in the attempt and collapses. Bugs pops in and says to the audience (in his normal voice): “The moral of this story is: ‘Don’t try to steal no 18 karats [carrots] from no rabbit.'”

I was able to find a copy of it on youtube so here’s what Warner Bros. thought about old San Francisco. Enjoy!