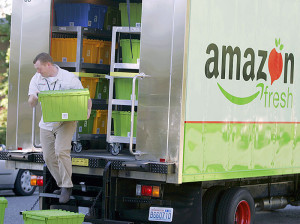 Apparently Amazon didn’t get the memo and is planning to start grocery delivery in San Francisco this fall. With one exception every company that’s tried to do this before has failed. Something tells me that for San Francisco Amazon will fail like the others, but at least it has a another side of it’s business to fall back on.

Few people remember back in the 90’s when there was a company called PeaPod that operated in San Francisco delivering groceries. They actually were buying their groceries from Andronico’s which meant you were getting top shelf fresh produce and meats, but it was a bit higher. Granted if you wanted top quality food delivered to your house it would cost you a bit more, but overall it really was maybe around $5 on a $100 order of groceries. Wife and I used to use them a lot because my family stopped going grocery shopping and just told us to pick it up for them when we went shopping.

This caused a few problems as we would now have to lug around two shopping carts and confuse the checkers as to why we would be paying for two carts separately which for some reason seemed strange to them. PeaPod changed this since we could order my family’s food online and have it delivered to them all paid in full. This worked out fine until one of the deliveries refused to bring the delivery up the stairs so my Mother assumed that they would never do this again which led us to have to go back to shopping for them.

It wasn’t too bad since PeaPod decided to close up shop around the same time, but a new company called Webvan had started up just a little before. Webvan wasn’t as good as PeaPod. I don’t know where they were getting their groceries from, but the couple of times we used them they would substitute something we ordered that they didn’t have with something that wasn’t even close to the same. Like you order six apples, but they’re out so they send over a watermelon. I’m not sure who did the thinking on the substitutions there, but they also didn’t last long.

Safeway is the only store that delivers groceries for a flat fee, but at this point it’s just as easy to go to the store for them since both of us aren’t working 40 hour weeks anymore. There’s no word yet on where Amazon is getting their supplies of groceries from or where they’re planning on stockpiling them, but the idea of bring back a Web 1.0 concept that didn’t work figuring you’re so big that you won’t have a problem is, well, a problem. I have a love for some of the old Web 1.0 companies. I used to use Kozmo all the time to rent DVD’s and then started added other stuff like ice cream and snacks in with the DVD. I especially loved that all I had to do was walk down to the corner from my house to return the DVD. That’s kind of like what Amazon is planning on doing, but with groceries as the main item and then you can supposedly add in some of their other products as well. Keep in mind that Amazon invested over $60 million dollars that it lost in Kozmo.

Good luck to you Amazon. No wait, not good luck to you. Amazon makes it’s employees wear ankle monitors like prisoners released to house arrest so that they can track them and data mine their workers to make them more efficient and fire them if they aren’t. That is not the kind of thinking that San Francisco has ever liked unless your home was Alcatraz.