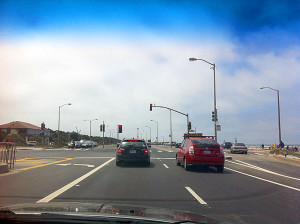 Well smooth as glass with sand all over it at least. That was the first thing I noticed since now that the road is black once again after being a dull gray for so many years you really notice the amount of sand that blows across it. Click on the photo to enlarge it to see for yourself. There really isn’t a fix for this except more wind to blow to sand away. I ended up having to take another trip over there this evening and found that the wind that picks up in the afternoon had done it’s job and the sand was off to the side. I suppose for now I’ll just think of the sand as a natural asphalt polisher to help keep our roads out there nice and shiny.

I’d also like to take a moment to note that I had written several times to then Mayor Gavin Newsom about repaving the street down there that it might encourage some food truck businesses and cause an over all re-awakening of the area. Well, since it’s only the street that’s been done and none of the parking areas there’s still that problem looming, but hopefully that will be added in in the near future. If you look at some old pictures of Playland when it was there I think that might have been the last time the road had a full repayment. The whole area could be nice if they could find a way to keep up the area, but they would have to start with the sand first.

At least for now you can drive your car in the area once again without having to take it in for a re-alignment afterwards.