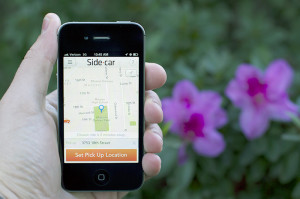 Apparently there’s more problems in San Francisco than just Muni. It turns out that I was wrong and that there are lots of people who like to take cabs, but they have trouble getting one or getting one to take them where they need to go — enter Sidecar.

I’ve actually started driving for Sidecar mostly because it seemed like an easy way to get some extra money in my free time. It has been a good thing and I’ve learned a lot since I’ve started driving for them. First is that getting a cab in San Francisco is really difficult depending on where you live. Most of the cabbies only want to be in high traffic areas so places like the Sunset and Richmond will get you thrown out of a cab quick style. There really isn’t anything you can do about this, except call and hope you’ll get someone. If you hop in a cab downtown and tell them you’re going to the Sunset or Richmond be prepared to get thrown out quickly because they usually can’t get anyone to drive back to the high traffic areas they like.

Then you’ve got surly cab drivers. I’ll admit it’s been awhile since I took a cab in San Francisco, but I always remember they always looked and sounded grumpy. On top of that they would try and pull their tip out at the end before you could figure how how much you wanted to give them sometimes tipping themselves 50% of your fare.

Well Sidecar doesn’t work that way. You’ll need an iPhone or Android phone and download the app which uses GPS to tell the driver where you are [it gives them more info than that, but it’s based on your GPS co-ordinates]. You ask for a Sidecar and you tell it where you need to go and then all the drivers in the area are notified that you need a ride. Someone will pick up the call and come get you. There will be a suggested donation for the ride. All rides are done through donation and not a fare like a cab because that comes under a different set of rules then. Once the car gets there you hop in and they drive you to where you want to go. At the end when the driver closes out the ride on their phone you can pay then with your iPhone based on the suggested donation. You can add more for a tip or less if you like and I’ll get into that in a minute or two. People who drive Sidecars can be identified by the bright orange MOX [mirror socks] that are on their rearview mirrors. Much more discrete than the big pink moustache that Lyft drivers have to use and there’s no requisite fist bump when they pick you up [really? who’s douchebag idea was that?]

Now in the time I’ve been driving I had to say that I’ve met a lot of really fun people. No one creepy and almost all of them were happy that I was able to get to them so quickly. They’ve been all over the map from 20’s to 50’s and students to doctors so they’ve been a very interesting group of people to talk to. They always seem to like when I tell them that I’m born and raised in San Francisco and I usually hand them a card for this blog so if any of those people are reading this HI!

Now there’s a few things I’d like to suggest to anyone who uses Sidecar for a ride.

The drivers have to keep up their cars and pay for the gas and if you haven’t heard gas is getting expensive. I did use Sidecar as a passenger the other day and told the girl who drove me I was a driver and that I wouldn’t stiff her and even told her how much I was going to pay. My drive from the Outer Sunset to Inner Richmond was suggested at $17 and I paid her $20. She gets $16 of that. I think I made her very happy.

I’ll keep doing this for awhile because with Sidecar it’s cheaper than a cab for most people and when I want to drive people I run the app and get ready to hop in my car. I don’t have any schedules so I get to drive whenever I get free time and I drive a few hours every day. At the very least it got me to wash my car and I recharged the air conditioning today so it feels like I’ve got a new car once again. It’s also easy to move stuff around when I don’t have piles of empty McDonald’s bags in the back from my daughter anymore.

Oh and if you’ve never used Sidecar and want to give it a try you can enter the promo code EventuallyEric and get a $10 credit to make it cheaper for you the first time. I even made a little sign I put in my car.